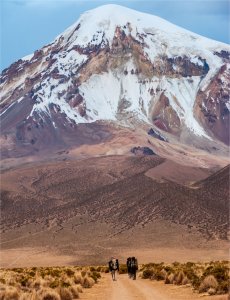 With Spanish, Quechua and many other indigenous dialects as official languages, Bolivia is one of the most culturally diverse countries in Latin America and has two capitals: La Paz and Sucre.

A favourite among tourist, Bolivia is home to beautiful and little-explored landscapes as the Sajama National Park, which is nestled close to the extinct Sajama volcano and the Payachata volcano complex (on the frontier between Bolivia and Chile), plenty of the natural wildlife of the Andean region, such as the vicuña, a close relative of the llama and alpaca, and the viscacha, a species of Bolivian chinchilla.

After an active day, how about ordering a majao or majadito? This is a local dish made with dried meat, rice, paprika, fried plantains and a fried egg.