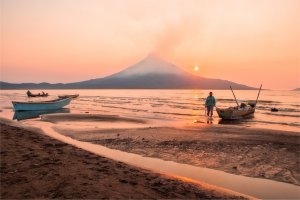 Granada is the main attraction, where tourists can find several architectural monuments and landmarks from the colonial era.

Another city of colonial intrigue is León, near the Cerro Negro volcano, where thrill seekers can practice “volcano boarding”—yes, sliding down volcanic slopes on wooden boards!

Cuisine is essentially similar to other Central American countries. One popular dish is the vigorón, a mixture of meats cooked with potatoes or manioc, served on a banana leaf.