Before considereing Flores Raras, the beautiful love story of Carmen L. de Oliveira’s book, think back to ancient Greece and the origins of the word “lesbianism”, in its loving sense. Lesbos was an island where the great Greek poet, Sappho, lived 25 centuries ago. Recognised as one of the nine greatest poets of antiquity (the others were men, among them, Alceu), she was also famous for dedicating her poems of love to other women. Sappho never wrote down her poems, just sang their verses, accompanied by a harp: truly lyrical poetry. 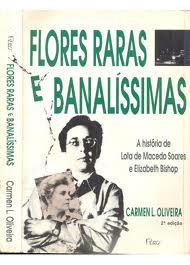 The book, Flores Raras and Banalíssimas, marks a very important period in both Brazilian literature and political change in Brazil, but the central plot is the love story of architect and landscape artist, Maria Carlota de Macedo Soares (Lota)—a dedicated and headstrong woman of great initiative and the creator of Aterro do Flamengo in Rio de Janeiro—and the American poet Elizabeth Bishop, who arrived in Rio in 1951 for a two-day stopver and, in search of meaning to her life, met Lota. They subsequently fall in love and a beautiful and romantic love story unravels.

Flores Raras was also made into a film. Produced by director Bruno Barreto and released in 2013, the adaptation doesn’t shy from the central theme. It was based on the genuine love story between two talented women that, during the troubled 1950s and 1960s, challenged the very conservative view that men should be married to women and “live happily ever after”. This clandestine love affair between Lota and Elizabeth helped bring about positive change to attitudes towards the LGBT community in Brazil.

Norms are needed, but culture can only be measured by how we divide our losses and gains. This was also the period that saw the construction and inauguration of the new capital city, Brasília, and the birth of Bossa Nova. The lead characters are played by Gloria Pires (Lota Soares) and Miranda Otto (Elizabeth Bishop). The excellent onscreen performances contributed greatly to the film’s international success, winning best film at the LGBT festival in 2014 at MAC, the cultural centre of art in Birmingham (UK), as well as several other awards in Brazil.