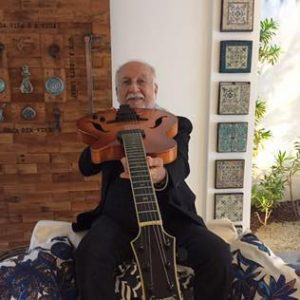 Bossa Nova pioneer Roberto Menescal, composer of big hits such as ‘The Barquinho’, will be accompanied by the very talented Brazilian guitarist Diego Figueiredo, on 29-30 November 2020, at the PizzaExpress Jazz Club (Soho), in two sessions, one at 7pm and the other at 10pm.

Between these two great musicians, the audience will also have on stage of PizzaExpress one of the revelation voices of MPB around the world, Celeste Caramanna, who performs with the duo.

Menescal is one of MPB’s (Brazilian Popular Music) big names. The Brazilian was nominated for a Latin Grammy Award for his work with the Bossossaucanova bossa group in 2002, and received the 2013 Latin Recording Academy Special Awards in Las Vegas in November 2013.

Diego Figueiredo is considered one of the most talented guitarists in the world today. Winner of several major competitions including the Montreux Jazz Competition and the VISA Award. Diego has released over 19 albums so far and three DVDs. His music is a fusion of Jazz, Bossa Nova and Classical.

Italian singer Celeste Caramanna has already opened major shows in London, such as Milton Nascimento and Nando Reis. Passionate about Brazilian music, Celeste is one of the promises of the new vintage of interpreters worth checking out.