Since Friday evening (26 May) the Embassy of Brazil in London hosted a series of cocktail parties to celebrate the start of a unique ten-day cultural exhibition – the Brasil Junino festival in London.

The opening event on Friday 26 May was deemed a huge success and the 130 guests and members of the press in attendance were treated to a sneak preview of Brasil Junino’s exciting line-up of attractions, all of which share the same aim – to promote Brazil’s famous Festas Juninas, or June Festivals, the biggest festival in Brazil after the famous Brazilian Carnival!

One feature of Brasil Junino that is sure to take London by storm is a series of colourful street performances throughout London. The open air cultural programme – which gives Londoners a dazzling look of Brazilian dance and theatre – is currently running daily at 2.30pm in Leicester Square and at 3.30pm in Trafalgar Square. There are also a series of additional daily shows that are open to the public – free of charge – at the Embassy of Brazil in Cockspur Street. See below for the full programme and also at www.brasiljunino.com.br

“Our aim is to give visitors a rare snapshot of Brazilian culture, set to a tantalizing backdrop of colour and sound”, explains Edilane Oliveira, Brasil Junino’s curator. “Brazilians famously love to party, but the Festas Juninas, or June Festivals, offer a fascinating expression insight into Brazilian culture and symbolism – it is our story and deserves to be shared”, she added.

Visitors to the Embassy of Brazil are also able to learn more about the cultural significance of such festivities in Brazil thanks to an interactive exhibition that profiles some of Brazil’s most-coveted festivals. The exhibition is open to the public from 1pm to 8pm and admission is free.

The programme runs until this Sunday (4 June) with a special closing performance at London Bridge Summer Festival next to the Mayor’s office (www.thelondonriviera.com) – in true Brazilian style – from 8 pm to 9 pm.

Brasil Junino opened to the public on 27 May and runs to 4 June at the Embassy of Brazil in London, 14-16 Cockspur St, St. James’s, London SW1Y 5BL.  Entry is free. For more information visit www.brasiljunino.com.br

Created in 2005 with the objective of promoting Brazilian culture and tourism, as well as supporting local communities, IBI is responsible for the organisation and running of the largest June Festival in Brazil, known as the “Maior São João do Cerrado”.

About the sponsor – The Brazilian Tourist Board (EMBRATUR)

EMBRATUR is a federal, state-owned agency part of the Brazilian Ministry of Tourism that is responsible for providing of support and marketing expertise when it comes to promoting Brazilian tourism overseas. 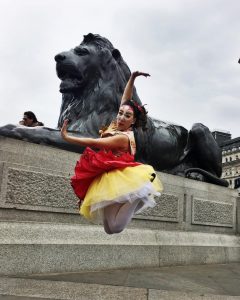