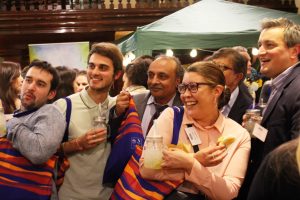 The event was held in London last night, on 14 March 2017, to promote adventure and ecotourism destinations across a number of Brazilian regions, with several exhibitors making the trip over from Brazil especially. The evening represents a renewed partnership between VBRATA, the Embassy of Brazil in London and the Brazilian Tourist Board (EMBRATUR) in the United Kingdom to promote Brazilian tourism in the UK.

More than 110 travel agents, tour operators and airlines as well as members of the trade press attended the event, many of whom already feature Brazil as a tourist destination, but were looking for new products and destinations.

The event, which adopted a typical camping theme for the evening, was held in the Embassy of Brazil’s most prestigious event hall, Sala Brasil, in the heart of London. 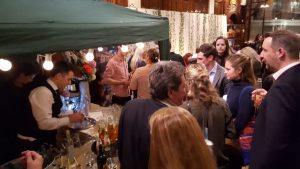 Operators; Gabriel Ribemboin from FAS (Sustainable Amazonas Foundation), a Brazilian organization that promotes environmental conservation and the improvement of living standards amongst riverside communities in the state of Amazonas, and Alex Robinson, an award-winning writer and photographer based in London, who is also a specialist when it comes to Brazilian adventure and ecotourism.

During the second half of the evening guests were able to mingle with exhibitors and guest speakers alike, allowing them to gain a deeper understanding of the featured products and destinations. 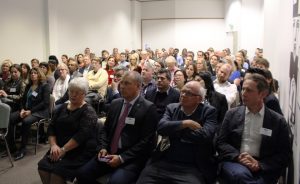 Auditorium during speakers and presentations

The workshop kicks off a series of events in 2017 that aim to promote Brazilian tourism in the UK, the result of the fruitful partnership established between the Embassy of Brazil in London, VBRATA – Visit Brazil Travel Association – the British/European Travel Trade Association Specialist in Brazil, and EMBRATUR – the Brazilian Tourist Board.

The ecotourism and adventure tourism sector looks set to grow in the UK with Brazil poised to increase its market share. According to figures released by the Ministry of Tourism, 23% of the British tourists visiting Brazil in 2015 were motivated by ecotourism and adventure tourism, an increase of 39% on the previous year. Furthermore, the World Economic Forum considers Brazil the country with the greatest potential for such tourism given that it has the most extensive biodiversity of species in the world, spread over six biomes and three large marine ecosystems. These conditions afford Brazil an enviable climate, clean water, fertile land, hundreds of thousands of animals and plants and paradisiacal landscapes, according to the Brazilian Ministry of Tourism and EMBRATUR. 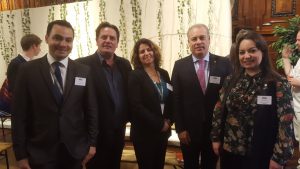 “The event was a great opportunity to drive interest in Brazil and motivate the sale of both ecotourism and adventure travel packages, as well as giving the travel agents and tour operators guests the chance to learn from some notable specialists. This is the first in a series of events organised by VBRATA in partnership with the Embassy of Brazil in London and the |Brazilian Tourist Board (EMBRATUR) that look to engage the British travel trade throughout 2017. We have an extensive and busy programme confirmed for this year”, said Chris Fuzinatto, Chairman of VBRATA Europe.

Founded in London in June 2010, VBRATA is a non-profit association that brings together tour operators, travel agents, airlines and other travel trade professionals recognised for their quality and professionalism in the UK and Europe, all of which offer specific travel programmes to Brazil. The association is dedicated to the promotion of Brazil, by running projects that help raise the commercial potential of the tourist and cultural attractions in a country that continues to grow professionally and yield impressive result across the sector.

To see photos of the event visit: www.facebook.com/vbrata.uk