Summer in Brazil—winter in the UK—is party season, and culminates in the biggest cultural celebration in the world: The Brazilian Carnival

There is a general acceptance in Brazil that o ano só começa depois do carnaval, or that “the year only gets going once the Brazilian Carnival is over”. For the uninitiated, Brazilian Carnival—to use its international moniker—is a superlative expression of cultural distinction. The festivities mark the beginning of lent and, traditionally speaking, Brazilians’ abstinence from meat, or carne, not dissimilar to any other Western pre-Easter observance. The difference being, of course, is that Brazilians opt to throw a massive 5-day blowout as opposed to whipping up some pancakes. 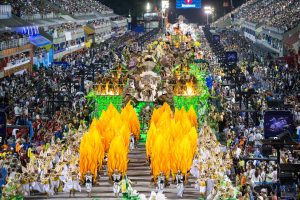 Officially, Brazilian Carnival, which is also a national holiday, falls on a Tuesday in February or March. However, the general consensus over time—no doubt aided by some diligent lobbying—has been to expedite things somewhat. The razzmatazz usually gets going on the preceding Friday, if not before, so as to incorporate a full programme of events and festivals. For all intents and purposes, the country grinds to a halt and abides to a 5-day rest bite from routine and convention. Due to the heightened logistic complications of returning to work on Ash Wednesday—which often requires some seriously prolonged, sobering travel—most employers only insist that staff be back at their desks by 1pm. In 2020, the Brazilian Carnival kicks off on Friday, 21 February and runs through to Wednesday, 26 February.

With some sense of normality restored, the front pages of Wednesday’s international media—from the financial broadsheets to the red top rags—will likely publish alluring images of scantily-clad, sequinned dancers from the Rio samba school parade, which traditionally takes place on the Tuesday evening. The most decorated of sirens, typically caked in glitter and done up like a peacock, is in fact the rainha do carnaval, or the Queen of the Carnival. This cabaret-like dignitary has become the hallmark for Brazilian pomp and ceremony. Brazilians are less about bunting and God Save the Queen, and more about fantastical, inhibition-free self-expression. And, it would seem, dressing up like an exotic bird.

The samba school parades are the Carnaval centrepiece. Although regional variations exist, from state to state, samba music tends to be the consistent and compelling undertone. Professional samba schools, like Mangueira and Deixa Falar, have been going toe-to-toe since the late-1920s, but it wasn’t until the 1950s that an era of professional competition was established. Ever since, the coveted carnival crown has been hotly contested, with the São Paulo (Monday) and Rio de Janeiro (Tuesday) editions being the most prized.

The scale of the production is hard to fathom. In Rio alone, for example, there are over 100 registered samba schools, of which only 12 make up the “Special Group” destined for the city’s grand finale: this is the Champions’ League of artistic expression and interpretation. And there is plenty to interpret. In essence, samba schools have an allotted time (usually between 70-80 minutes) for their congregation (up to 4,000 people) to parade down a Sambadrome, a fancy name for a purpose-built avenue flanked with tiered seating. The school’s performance is framed by a chosen theme, which in turn informs the intricate choreography and lavish costume design. As streams of delirious dancers shuffle down the runway, a series of colossal floats, each central to the school’s particular theme, dwarf the rapturous onlookers in the stands. Whilst the parade is a symphony of performances, there is something quite stellar about the drum section. They represent a harmonised collective of busy percussionists—as many as 400—playing a range of hand-held drums and snares. Brazilians refer to them as the bateria, which suitably translates as “battery” in English, but their sound is more than just electrifying: it is the heartbeat of Carnaval.

Events are nothing short of energising for the armchair judges too; national television broadcasts dominate prime time schedules. Official voting, however, is the responsibility of an experienced panel of experts that examine set criteria, including theme, costumes, choreography, song, to name just a few. To the casual observer, the school is an ocean of colour and unbridled joy, but to the judges each wave of the parade brings a new aspect for scrutiny (see box for more detail of what to look out for).

Samba parades—what to look out for

Front commission – these are the first to enter the Sambadrome, a select group of performers that introduce the theme and lead the procession.

Plot or enredo – each year schools chose a theme or plot in advance, which in turn informs every aspect of the performance (song, costume etc).

Song – the samba song is critical to keeping the procession in time, creating a fluid and seamless team performance. The song is judged for harmony, lyrics and vocals.

Mestre-Sala and Porta-Bandeira – a celebrated couple of performers that parade the school’s flag.

The bateria, or drums – a section of mixed percussionists that determine the pace of the parade. The heartbeat of Carnaval: the harder you beat, the faster they dance.

Ala das Baianas – a section of performers dressed as Baianas, or traditional ladies from Bahia.

Velha Guarda, or Old Guard – a section of elder performers, mostly honoured members of the congregation or founders of the schools, often dressed in suits and panama hats.

The singer – the samba song relies on a dominant lead vocal, supported by a chorus of support singers. The singer performs tirelessly to stay in sync with other performers, such as the drum section.

The carnavalesco – the individual or team of professionals responsible for the overall design and performance of the samba school: very much a side-line managerial role.

Perhaps one of the most magical aspects of these larger-than-life productions is that schools reserve a section for members of the public to get involved. Participation is dependent on strict commitment to rehearsals and costume hire, as ultimately each individual’s performance contributes to the school’s overall score, but this has become increasingly popular with thrill-seeking tourists. Those looking to strut their stuff in the sambadrome should contact their school of interest directly, with plenty of notice (no later than December).

Away from the glitz and the glamour, visitors to Brazil during Carnaval flock towards vibrant street parties, or blocos de rua. They are omnipresent, in fact, and the vibe tends to be more akin to London’s Notting Hill Carnival: an authentic community celebration. They come in all shapes and sizes, with some catering specifically for families with young children—inclusiveness is the name of the game.

Local partying nuances are inevitable in a land of continental proportions, and further north, towards Salvador, Recife and Fortaleza, another cultural anomaly looms large: trios electricos. These huge motorised platforms act as mobile concert stages on which popular artists perform in front of hoards of insatiable axé (a poppy music genre) fans.

Each region has its own cultural rendering of Carnaval, some sort of local adaptation or tradition that captures the spirit of its people. Certain customs have become major productions, like the Bonecos de Olinda, or Olinda Dolls: giant effigies of famous figureheads (ex-presidents, celebrities etc.) that are thrust aloft and marched through the streets by the merrymakers of Olinda. It is irresistibly playful and, undeniably, unique.

And, perhaps, unique is the most apt word. Semantics hinder any true sense of Carnaval when talking to a foreigner, as carnivals tend to conjure up images of village fetes and pageantry. However, the Brazilian Carnival stretches far beyond any quaint expression of local custom. It is less about rituals and ceremonies, and more about a remarkably heterogeneous nation coming together, dancing together, being together, with one unified mission: to keep the party going.

So, with so much on offer in Brazil this summer, all that remains is to start planning your escape from the European winter. To find out more about travelling to Brazil see this edition’s article published by VBRATA (Visit Brazil Travel Association).

To find out more about travelling to Brazil visit www.vbrata.org.uk or contact your local travel agent.

Ed, 37, is English and has lived in São Paulo since 2008. He is a writer, translator and branding specialist. As father to two young Brazilians, Willoughby and Jasper, he spends much of his time teaching them the merits of golf, rugby and cricket.