Amidst all its natural beauty, the region offers craggy landscapes replete with waterfalls; tourists go in search of nature and the uniqueness of the region.

Chapada dos Veadeiros, one of Goiás’s principal tourist attractions, is a big draw for tourists wanting to explore the region’s unique scenery and be at one with nature. Spanning several municipalities, such as Colinas do Sul, Cavalcante, and Alto Paraíso de Goiás, it’s an important water basin and full of landscapes of distinct natural beauty, with dozens of waterfalls and huge rocky cliffs being the defining characteristic of the region.

Here we offer readers an alternative take on Chapada dos Veadeiros, for those who want to avoid the usual tourist track and experience nature and inner peace. 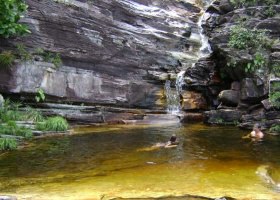 To get things started, the first tip is to visit a valley that remains relatively unknown in the area. The most famous is the Vale da Lua (Valley of the Moon), which is easily accessible for all. Not many know, however, are so familiar with the Vale de Marte (Valley of Mars), one of the most mystical of Chapada. Like the Vale da Lua, the Vale de Marte was named after the grey and reddish rock formations that dominate the area, a colouration directly attributed to the interaction of exogenous agents—water, wind and others—with the land over thousands of years.

A real hideaway of peace and tranquillity, it’s easy to spend time appreciating this spot in sheer silence. The Vale de Marte is located at Fazenda Ouro Fino, in the Complexo do Prata, 65 km from Cavalcante (322km from Brasilia and 85km from Alto Paraiso). To get to the Complexo do Prata, you’ll need to hire a guide, which can be done at the Tourist Assistance Center (CAT) in Cavalcante, or even at the CAT in the Comunidade dos Kalungas do Engenho ll (which is on the way).

Take a look at some other suggestions, places of true tranquillity and peace. Distances are calculated from the region of Pousada Inácia, located near Fazenda São Bento in Alto Paraíso:

Cachoeira do Abismo – Accessed via 23km of paved road, and then 19km of dirt road, it’s a hike of medium to high difficulty: a walk of 4000m. It’s located in the region of Vila de São Jorge. There’s an entrance fee of R$10, which goes towards the costs of preserving the area. 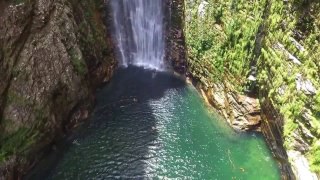 Cachoeira do Segredo – In São Jorge. 23km of paved road, then 25km of dirt road, it is considered a difficult hike of 7km, and so is recommended only to real adventurers. R$10 fee also applies.

Flor d’Ouro – 12km of dirt road, this is an easy hike of only 400m. Free Windmill. A secluded waterfall that allows swimming.

Águas Termais (Thermal Waters) – There are natural, thermal waters in the Chapada dos Veadeiros. To get there: 23 km of paved road, followed by 27 km of dirt road and easy access via a 150m walk. Located close to São Jorge. Admission is R$10.

Cachoeira dos Anões—22 km of asphalt, leaving Inacia, followed by 1km of dirt road will get you to the trail of average difficulty: 3km of walking in total, in the direction of Brasilia. R$15 fee.

Cachoeira do Doutor e Gabi —Next to Alto Paraíso, the two waterfalls are inside the grounds of the Inacia hostel and access is reserved exclusively for guests.