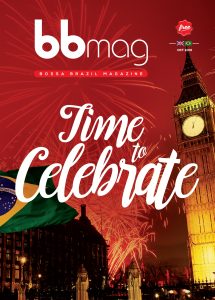 End-of-year parties in Brazil : the curious mix of festive traditions, rituals and games draw both comparison and contrast to celebrations in the UK

In most countries around the world the much anticipated end-of-year celebrations usually take place on the same dates. However, as well as the obvious climatic contrasts, they are also defined by notable cultural differences, customs and traditions, as is the case with Brazil.

Christmas in Brazil is the temporal opposite to the cold scenario in England and coincides with the peak of tropical summer. For this reason alone the air conditioning is just as important as the guests at a family reunion. However, the image of Santa Claus in Brazil is exactly the same as that of the northern hemisphere, with his heavy red clothes, his reindeers and his sleigh. Brazilians could, perhaps, adopt a tropical version of Santa Claus, sporting a bathing suit, riding a surfboard and rehydrating himself with coconut water, don’t you think? It might be more appropriate given the hot reality of the Brazilian Christmas.

In general, despite the geographical distance, Brazilian Christmas traditions speak mostly to the country’s Portuguese heritage – imported at the time of colonisation – but also share similar elements to British yuletide festivities. Latin religious symbolism, such as any typical Nativity Scene, alongside Christmas trees decorated with lights, tinsel and ornaments are commonplace in Brazilian homes from the beginning of December.

Games like Amigo Secreto (“Secret Friend”) as it is known in São Paulo or Amigo Oculto (“Hidden Friend”) in Rio de Janeiro are also very popular variants of Secret Santa in the UK. The ritual consists of drawing names from a hat, and buying a gift for that person without disclosing who your secret/hidden friend is. On Christmas Day, you get together and in turn give clues as to who you have bought the gift for, allowing the rest of the group to guess who the recipient is. It is a fun way of socialising and bringing people together – in the same way that Christmas crackers do in the UK.

One of the most significant differences in traditions is when families eat Christmas dinner and exchange gifts. While in the UK children usually hang up their stockings by the fireplace before going to bed on Christmas Eve in the hope that Santa will leave presents to be opened the following morning, children in Brazil are not usually required to be so patient. ‘O Bom Velhinho’ (The Good Old Man) – as he is also known locally – usually makes his stop before midnight on the 24th, when families gather at home to exchange gifts.

On the same night, after all the unwrapping, the whole family sits at the table to celebrate with a hearty Christmas dinner. The preferred Christmas dishes in Brazil range from salted cod – another strong Portuguese influence – pork, turkey or roast chicken breast (also locally known as chester). The traditional accompaniments are often rice with raisins, salads, dried fruit and a good portion of farofa (stuffing). For dessert Brazilians usually eat pastries, tropical fruits and ice cream to refresh the palate and cool down from the heat – which is quite a significant departure from the delicious, flaming Christmas pudding in the UK!

One week later and it is on to the New Year. The UK celebrates the turn of the year two hours before Brazil, the summer time difference reduced from four hours to two thanks to daylight savings.

In Brazil, given the fact it is high summer, New Year’s Eve – or Réveillon, the French word widely used by Brazilians – is commonly celebrated on the beach and is synonymous with partying, happiness and high spirits. With concerts, shows and firework displays it is widely considered to be the second largest celebration in the country, after Carnival.

Unlike in the UK, where revellers seek refuge from the intense cold soon once Big Ben’s chimes and subsequent fireworks are done with, the street parties and festivities on the sandy shores of Brazil carry on until sunrise.

Notoriously spiritual and superstitious, Brazilians like to dress in white for the evening to bring peace. As soon as the clock strikes midnight, partygoers run to the water’s edge, take off their sandals and jump seven waves in the sea with their right foot forward for good luck.

Songs like “Adeus Ano Velho, Feliz Ano Novo” (Goodbye Old Year, Happy New Year) – a variation of the British “Auld Lang Syne” – are also common in Brazil, whilst friends and family embrace each other and make toasts with sparkling wine or champagne  – more common than whiskey or gin in Brazil.

The New Year superstitions of some Brazilians also include exotic and interesting influences of African origin, as is the custom of placing small boats or baskets in the sea, carrying flowers, perfumes, jewellery and other offerings to a sea goddess who, according to legend, is a fan of receiving such gifts.

According to popular belief, the sign that the goddess has accepted the gifts is when the boat floats a short while before sinking. If in the morning the tide brings back the items it means the offerings were not accepted. This ritual is performed every year across the country with dedication and devotion.

Of all the Brazilian rituals designed to conjure up good luck on New Year’s Eve, there are some that are really interesting and unusual. On 1 January, for example, you should never eat bird meat, such as turkey or chicken, as these animals popularly signify the retrogression of life. Instead, eat lentil soup to summon good luck, fortune and prosperity.

Always remember to start the New Year with a full wallet in your pocket, so that it remains that way for the rest of the year – only, please be careful not to end up losing the wallet on the beach!

To attract a new love in the year to come, legend says you should ensure that the first person you embrace after midnight is a person of the opposite sex – or the same sex, depending on your preference.

Some superstitions go even further: they say that on New Year’s Eve you should use red underwear to increase your chances in love and yellow to bring money. In addition, wearing green brings health and purple brings inspiration. Believe me; many adhere to this, including this author.

Finally, although some traditions like these are quite different and unique, there are also some similarities. The tradition of making New Year’s resolutions, for example, is as established in Brazil as it is in the UK – as is the usual custom of breaking them. The habit of spending the evening next to the most cherished people in your life too is also common.

Irrespective of commonalities and differences, the fact is that the UK and Brazil celebrate the end of the year in their own way. But ultimately the objective is the same: to commemorate the past year and look forward to what lies ahead. And with so many interesting customs, between old traditions, fun rituals and good food, one thing can be said for sure, the two countries know how to do it well.

Considered to be the biggest New Year’s Eve celebration in the world, the party unites about two million people on the Copacabana beach for a magnificent 20 minute fireworks display followed by a music concert and one big party. Dozens of international cruise ships drop anchor to watch the fireworks and luxurious beachfront hotels offer special dinners and parties with caipirinha from sun down to sunrise.

Ilha da Magia (The Magic Island), the nickname for the capital city of Santa Catarina, offers, in addition to more than 100 paradise beaches, an incredible fireworks display at sea. The nightclubs of Jurerê Beach usually host the most exclusive and expensive of the New Year’s Eve parties, with the presence of the celebrity A-List from both Brazil and overseas. Balneário Camboriú, an hour away, receives thousands of tourists on account of its stunning fireworks display, which are lit from an island and its tall buildings.

Despite sharing the name of the São Paulo state capital, Morro de São Paulo actually is one of the biggest party islands of Northeast Brazil. Everything happens on the sea’s edge. The restaurants offer delicious and affordable banquets, allowing its customers to enjoy everything with their feet in the sand. In addition to the fireworks, there are many open and closed parties with ample to drink and various national and international attractions.

Every year the beach of Iracema in Fortaleza plays host to one of the biggest New Year’s celebrations in Brazil. With huge fireworks and music from forró and country music acts, the line-up gets the crowd going and continues through until dawn.

Located on the northern coast of São Paulo, this island of natural beauty is a regular pit stop for yachts, ships and tourists in Brazil. Naturally there are fireworks, but visitors can sample a good range of quieter, more sophisticated options in terms of accommodation and dining.

The capital of Bahia stages one of the country’s biggest celebrations on the water’s edge. With acts ranging from axé to pop and from afro to rock, the crowd revels all night in front of dozens of stages and floats, which feels a little like an appetizer for the Carnival in February.

Graduated in Publicity and studying for a post graduate diploma in Globalization and Culture, Guilherme was born in Santa Catarina 28 years ago and had lived in Curitiba, Rio de Janeiro and Brasília before moving to São Paulo. He likes traveling the world, experiencing other cultures, photography and, of course, writing.