As is well documented, in ancient Greek society there was no distinction between sexual desire and behavior amongst the sexes. So much so, in fact, that the idea of their being two distinct sexualities—heterosexuality and homosexuality—was almost inconceivable. For the Greeks there was only desire, which was driven by the “beauty” of the person, regardless of their gender. On reflection, we can deduce that life is a constant journey back and forth from the present to the past: people do not change; it is their values that change ​over time! The universe may be extensive, but today, thanks to advances in technology, it has become much easier to travel the world.

On the subject of travel, the film Corpo Elétrico, by Brazilian director Marcelo Caetano, was released in Brazil in August 2017. The film is a poignant and uplifting story about sensuality and sex. The director depicts a somewhat provocative narrative, the life of a 23-year-old Paraiban gay boy (Elias), played by actor Kelner Macêdo, who loves his job as the assistant to a fashion designer at a women’s clothing factory in São Paulo. Elias enjoys going out and having fun with his friends. He is the flirtatious type and lives his life without worrying about tomorrow. Eventually, however, he meets and falls in love with an African immigrant of the same age (Fernando), played by the actor Welket Bungê, who works on the production line of the factory. 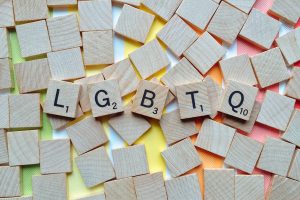 Corpo Elétrico, however, portrays its characters naturally, in a way that is void of judgment. It portrays a group of young middle-lower class people from São Paulo going about their daily lives, and in doing so showcases loving relationships in today’s diverse world. The film won the Maguey Award at the Guadalajara Film Festival in Mexico, one of the most prestigious LGBT film awards.

In other news, but also related to diversity, the Victoria & Albert Museum (V&A), one of London’s most popular and renowned art and design museums, is offering a monthly tour specifically designed for the LGBTQ community. The project—the first of its kind in the UK—is run by volunteers and is far from bland, with the guide recounting fascinating stories about gender and sexual identity that relate to an exclusive selection of LGBTQ-related objects from their rich catalogue dating back to Greek-Roman times, through to the Renaissance period and up to Modern times. These tours, which are free, are offered on the last Saturday of each month.

At the end of the day these are crucial steps in contributing to greater understanding, inclusion and respect when it comes to the happy coexistence of different and dignified people, those who are free to express and live comfortably according to their sexual preferences, free to claim equality and traverse any barrier imposed by conventional society.