Brazil: one of the most popular tourist destinations amongst the LGBT community

The country is full of options for the LGBT community and so we decided to feature some of the most recommended gay-friendly destinations:

Elected as the number one gay-friendly destination on the planet by various magazines, the city bustles with LGBT tourism all year round. The street named Farme de Amoedo in Ipanema denotes the gay point of the beach. After a long day in the sun, modus operandi is to carry on at one of the many local “happy hours” before finishing up at one of the city’s many nightclubs.
São Paulo

Known for hosting the world’s largest gay parade, São Paulo is home to one of the world’s most exciting LGBT scenes, replete with internationally-renowned bars and nightclubs. In the city centre you will also find the Museu da Diversidade Sexual (Museum of Sexual Diversity).

A true paradise, the “Ilha da Magia” (Island of Magic) is a natural draw for the LGBT community thanks to its many beautiful beaches. The favourite spots are the downtown nightclubs, packed with tourists throughout the summer months, and Praia da Galheta, one of the most famous nudist beaches in Brazil.

The city launched the “Traga suas cores” (Bring Your Colors) campaign in 2014, to promote the state of Minas Gerais as a destination for LGBTs. In addition, official bodies like the Associação de Turismo LGBT de Minas Gerais and the Câmara de Comércio LGBT, both entities that support tourism and business development, work to support and serve LGBT interests. It is well worth checking out the bars and nightclubs in the Savassi region.

Widely believed to have the highest standard of living of all Brazilian municipalities, the city boasts the highest number of gay marriages in the country. Curitiba offers a raft of options ranging from drag queen stand-up comedy to some of the more well-known alternative parties. 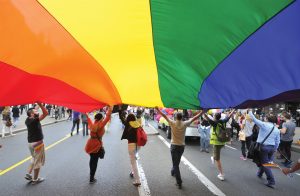 The action in Rio de Janeiro does not stop there. On 11 December, the city hosted its 21st LGBT Pride Parade. Staged along the famous Copacabana waterfront, the theme this year was “Eu sou minha identidade de gênero”, (I am my gender identity), upholding the point that identity is a characteristic that should be respected. In addition to the march, there is a week full of activities that celebrate LGBT culture throughout the city. Currently, the Rio parade is the second largest in the country, behind that of São Paulo.

Prince William, second in line to the British throne, made history in 2016 by being the first member of the royal family to appear on the cover of an LGBT magazine. He was featured in the July issue of the British magazine, Attitude, commenting on issues related to bullying.

“No one should suffer bullying as a result of their sexuality or for any other reason for that matter,” said the royal heir. He also urged anyone who was the target of bullying on account of their sexual orientation to seek the support of someone they trust, be it a friend, a teacher or some other type of social support. “You must be proud of who you are; there is nothing to be ashamed of,” he added.