The history of jeans started in Nimes, France, where the material was first made, in around 1792. Initially known as the material “de Nimes”, this expression was later abbreviated to “denim” 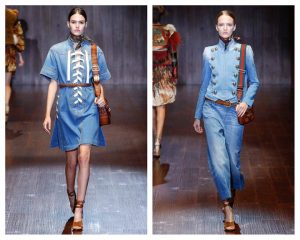 Material “de Nimes” was used for the clothes of the sailors from the Port of Genoa. The Genoese sailors used to call their uniforms “genes”, which, in the Italian accent, sounded like “jeans”, and thus the modern term was born and made its way around the world.

Later on, denim arrived in the US, via Levi Strauss, who was trying to find a durable but comfortable to wear material. His search led him to Europe, known to be more advanced at the time, and eventually to Nimes, where he found the now famous twill cotton fabric. The first lot he took to the US had the iconic code number 501, which has gone on to become the brand’s classic model. 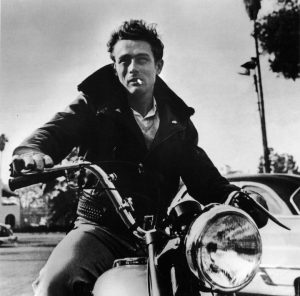 During the Second World War, the material was used for American soldiers’ uniforms, which helped to develop denim’s image as being symbolic of virility and strength. In the 40s, jeans’ success was spurred on by the wave of Harley-Davidson bikers, and their beat-up looking outfits.

But it was in the 50s that jeans gained their eternal fame as a symbol of rebellion, much in part thanks to Rebel Without a Cause (1955), with teen heartthrob James Dean playing the role of Jim Stark, in a classic jeans and white t-shirt combo. Once Dean had broken the ice, the mantle was passed on to other heavyweight stars, such as Marlon Brando, Elvis Presley and even Marilyn Monroe, who all used jeans as a symbol of their sexuality, as well as for their transformative power.

It didn’t take long for denim to catch the attention of the high-fashion world: Karl Lagerfeld was the first to make a studded denim jacket for Chanel. 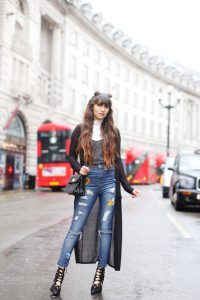 The first pair of customized jeans appeared during the hippie movement of the 70s, the now famous flares quickly became popular with the flower-power scene, summed up by the mantra “Turn on, tune in, and drop out” –  stated in 1964, by Timothy Leary, a Harvard professor who became famous for promoting the therapeutic and spiritual benefits of LSD. Stylists such as Yves Saint Laurent, Emilio Pucci, Valentino, Zandra Rhodes and Bill Gibb all tried, with varying degrees of success, to make a profit out of the hippy aesthetic, but there was no substitute for the handmade, DIY look, so central to the style’s ethos.

In the last few years, sales of jeans had been decreasing, with the rise in popularity of sportswear. But the recent London Fashion Week showed that things are once again looking up for denim, with the latest trends inclining towards jeans from head to toe. 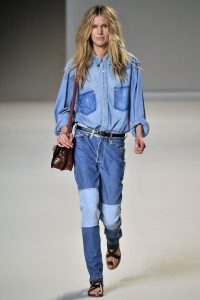 This season’s must have is waist-high jeans with a denim shirt and flat sandals.

Louis Vuitton reinvented denim with shoes, and he wasn’t the only one: the famous shoe stylist Laurence Dacade created some embroidered denim boots for Chanel. Jimmy Choo also got in on the denim act.

A safe and eternal bet, jeans are always a classic and never out of season, and the possibilities for matching them up with different looks are endless.

FLÁVIA BUCKER is from the state of Rio Grande do Sul and currently lives in Balneário Camboriú. She has been a specialist in Fashion Design and Industrial Manufacturing for eight years, also working with Fashion Production and Digital Media Journalism. Flávia has a post graduate degree in Contemporary Fashion Production and Image Culture, as well as being a registered Journalist. Her start in the media came with her fashion blog, in 2006, and she went on to work in communication, creating content for websites, magazines, newspapers and three different TV channels, always in the fashion area.