Sisters Grimm are delighted that Oscar, Emmy, Golden Globe and Tony Award-winning Jeremy Irons has agreed to narrate their new show, VOICES OF THE AMAZON, a passionate dance musical from the heart of Brazil. VOICES OF THE AMAZON, which is receiving its UK premiere at Sadler’s Wells from 4 to 8 July, is directed by Pietra Mello-Pittman, choreographed by Helen Pickett and composed by Ella Spira in collaboration with Brazilian songwriters Danny Nascimento, Dito Martins and Julien Davis and world‐renowned percussionists Olodum.

Jeremy Irons many roles in film, television and theatre include Brideshead Revisited (Golden Globe nominated), The French Lieutenant’s Woman (BAFTA nominated), Elizabeth 1 (Golden Globe and Emmy Award winner), The Mission, Reversal of Fortune (Academy Award winner) and The Real Thing on Broadway (Tony Award winner).  In October 2011, he was nominated Goodwill Ambassador of the Food and Agriculture Organisation of the United Nations.  He supports a number of charities, including the Prison Phoenix Trust in England, and the London-based Evidence for Development which seeks to improve the lives of the world’s most needy people by preventing famines and delivering food aid, for both of which he is an active patron.

Jeremy Irons said of his involvement in VOICES OF THE AMAZON “I was very much impressed by both Pietra and Ella in the way they approached me and intrigued by the multi-media approach to the world wide problem of deforestation and attacks upon indigenous populations. Something about their spirit came through their proposal and now having worked with them I know it will imbue the final production which I look forward to seeing.”

VOICES OF THE AMAZON will open at Sadler’s Wells on 4 July 2017 following an appearance at the Chekhov International Theatre Jubilee Festival in Moscow from 14-16 June. The show will then travel to Singapore to perform at Grand Theatre, Marina Bay Sands from 28-30 July. The show has recently been announced as part of the line-up for Latitude festival 2017.

Set amidst the Brazilian rainforest, VOICES OF THE AMAZON follows the story of Beleza; a water spirit from the Amazon, whose search to cure her dying sister takes her on a life-changing journey deep into the rainforest.

VOICES OF THE AMAZON features a sensational musical score, containing sounds recorded from the Amazon Rainforest, with music and songs performed in English and Portuguese. Combined with Helen Pickett’s fusion of ballet, contemporary and capoeira, the show aims to highlight the damaging effects of deforestation, the loss of natural medicines and plants, and promises an exhilarating live experience, embracing the true spirit of Brazil.

VOICES OF THE AMAZON is produced by Sisters Grimm, the creators of the Grammy® Award-nominated show INALA. 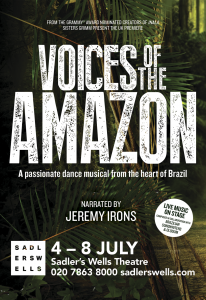