The inaugural edition of The London Caipirinha Festival, a mouth-watering event created to promote the infamous Brazilian cocktail, has officially announced its list of winners across all categories.

The event, which was created and organised by VBRATA (Visit Brazil Travel & Cultural Association), was staged with the support of some prominent partners, including the Embassy of Brazil in London, as well as several other media sponsors.

The London Caipirinha Festival is the largest annual Brazilian drinks and cocktails competition in London, designed to stimulate general interest in Brazilian gastronomy and, more specifically, promote cachaça to the British market.

The competition took place over a period of 10 days, from 5 – 17 September, and encouraged Londoners to visit the 19 participating bars and restaurants and, having sampled their respective entries, vote for their favourite cocktails. The public votes, cast on the festival website, carried a 50% weighting of the final scores, whilst the remaining 50% was determined by an expert jury, members of which visited each establishment in turn to assess the respective entries and services.

The table below rounds up the list of winners of the 2017 London Caipirinha Festival:

The London Caipirinha Festival is an annual event and the next edition is already confirmed for June 2018. 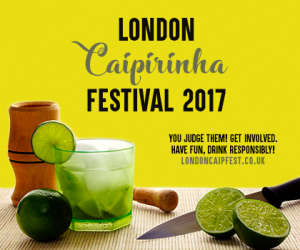 ABOUT THE LONDON CAIPIRINHA FESTIVAL

The London Caipirinha Festival was created by VBRATA to promote Brazilian culture across various sectors in London, with an emphasis on gastronomy and cachaça. The Festival is dedicated to the caipirinha, the most famous of Brazilian cocktails, as well as the participating bars and restaurants competing for the title of “The Best Caipirinha in London”, and a variety of other accolades. For more information, visit www.londoncaipfest.co.uk.

VBRATA—Visit Brazil Travel & Cultural Association—is a non-profit, London-based organization dedicated to promoting Brazil as a tourist and cultural destination amongst UK and European audiences. Our membership consists of travel trade specialists and cultural experts that offer industry-recognized services relating to tourism in Brazil. Should you need advice or information about traveling to and from Brazil, contact one of VBRATA’s associates: they are the experts when it comes to Brazil. For further details, visit www.vbrata.org.uk.