“Portas” easily showcases Marisa’s ability to weave an eclectic mix of genres together with a style and fluidity that only comes from the skill she’s collected across her acclaimed career. The album has a consistent backdrop of soul filled vocals that align with delicate nuances of Marisa navigating the array of subject matter. Elements of which are stripped back and acoustic, elegantly laced around the more vibrant and produced tracks.

Due to the COVID-pandemic, the album “Portas” was recorded, mixed, and mastered with remote recordings from Rio de Janeiro, Lisbon, Los Angeles, and New York. About that experience, Marisa explains: “It all worked out without many difficulties and it’s something we wouldn’t have tried to do if we could get on the plane and meet people. But due to the impossibility of doing it in person, we ended up doing something that I think we will no longer stop doing (remotely) because it really works.” 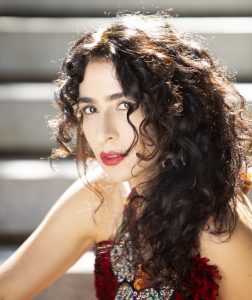 The visual concept of the album, including its artwork, was created by the Brazilian painting artist, Marcela Cantuária. “It ended up being an audio-visual dialogue of two contemporary women putting their sensibility at the service of art. I think she managed to translate me very well and all these songs in her bodywork. I think she empowered all the tracks and my own expression beyond what I could imagine.” states Marisa.

Having already collected so many impressive accolades across her life as an artist, the announcement of the album has left audiences waiting with breath that is baited. As well as her four Latin Grammy wins, she has notably recorded a duet with Talking Heads frontman David Byrne and sold over 15 million albums worldwide. With a career that has spanned over thirty years she is regarded as the greatest Brazilian singer of her generation with the creative strength of her live performances as well as the consistent quality of her entire discography – the new album being no exception.

WATCH AND LISTEN TO THE ALBUM HERE: