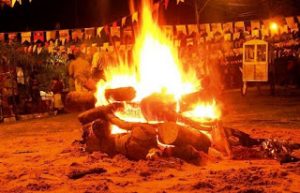 The Festa Junina (June Festival) is a celebration that Brazilians really look forward to, and has its roots deep within Brazilian culture.

Anyone who travels to the country at some point between June and July will come across a traditional festival far removed from usual clichés of Samba and bikinis, but which retains all the fun, happiness, dance and sweet treats we all associate with Brazilian parties. The Festa Junina has been commemorated in the country since at least the 17th century, and as with most traditional festivities, has its origins in religion.

It is believed that it all started with rural Germanic and Roman peoples, who created rituals in honour of their Gods of fertile land and fruitful harvests. The rituals tended to occur during the transition period between winter and summer, in particular around the time of the Summer Solstice, in June, and mainly in Southern Europe. Common ways of marking the occasion were bonfires, balloons, songs and dance. As Christianity took hold of the continent in the Middle Ages, the Church simply put its Saints in place of the pagan Gods and the celebrations were allowed to continue. The date 24 June was dedicated by Catholicism to St. John the Baptist, Jesus’ cousin, and the corresponding festival had its name changed to the Feast of St. John. In addition to Saint John, tributes were paid to Saint Anthony, on 13 June, and Saint Peter, on 29 June.
As Portuguese colonization progressed, the aforementioned celebrations naturally established themselves in the Brazilian colonies, not least because the native tribes of the New World and the slaves wrenched from Africa had similar festivals in their own cultures. With time, the Brazilian version of the festival started to take on its own traditions, mixing together its European origins with elements from the local indigenous populations, as well as those from Africa. These newly developing Brazilian folk traditions took on the name Sertanejo, an all-encompassing term which refers to this traditional Brazilian countryside hotchpotch of influences. The festivities were well spread out throughout the whole of Brazil, but had their epicentre in the North-eastern regions, where even nowadays Festa Junina is commemorated during the entire month of June, complete with Square Dance competitions. 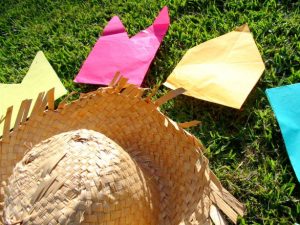 Festas Juninas happen all over Brazil, in every state, and are famous for their traditional food: pamonha (sweetcorn based paste), corn on the cob, canjica (a kind of sweetcorn porridge), cous-cous, popcorn and lots and lots of sweets such as cakes, cocada (coconut sweets) and pé-de-moleque (literally ‘kid’s foot’, we know it as peanut brittle). The low temperatures at this time of year, in the southern regions of the country, make hot beverages a popular choice to accompany the snacks, the most famous being quentão (mulled-wine). The traditional decoration consists of pennants, streamers and banners, with obligatory, over the top, country-bumpkin style fancy-dress, and activities like square dancing, lighting of bonfires and party games, all to the sounds of forró, a traditional North-eastern Brazilian genre of music.

Festa Junina is undoubtedly a special time of year in Brazil, as well as a synonym of fun for all age groups.