Brazil is the first Latin American country to host the Olympic and Paralympic Games, the unique and traditional sporting competition of Greek origin 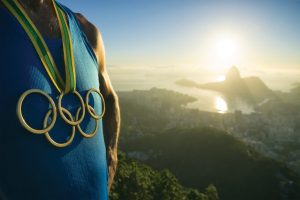 Athletes from all over the world compete in the Olympic and Paralympic Games. Organised by the International Olympic Committee (IOC), based in Lausanne, Switzerland, every four years a different city is chosen to host the Games. This year, the Olympic Games will be staged in Rio de Janeiro, from 5-21 August, the first time that the Games has taken place in South America. Another first is the decentralisation of some of the football matches from the host city. Given that Brazil hosted the 2014 FIFA World Cup, and the subsequent construction/renovation of 12 FIFA approved stadia, it was decided that these new and modern resources should be used.
11,000 athletes, from over 200 countries, are expected to compete across 39 different sports. At the time of writing, Team GB had already confirmed the participation of 128 athletes in 11 sports. However, others were still trying to qualify for their right to compete at the Rio 2016.

The football, a shared passion amongst the English and Brazilians, will take place across six different locations. Brasília, Brazil’s capital city, will have the privilege of hosting the first two Brazil games in the men’s tournament, against South Africa and Iraq. The city will also host two quarterfinals (one in the men’s and one in the women’s competition).

Belo Horizonte, where Team GB will be based for their final pre-Games preparations, will host a number of important games in the first phase of the men’s tournament: Algeria vs. Portugal and Fiji vs. Germany. In the women’s tournament the Mineirão stadium will welcome the USA team, the current two time Olympic champions. The city of Manaus will stage games between some of the strong contenders for the men’s gold medal – one of them, Switzerland, who will have to make do without their playmaker Zlatan Ibrahimovic, who recently announced his retirement from international football.

In Rio de Janeiro, the Olympic Stadium will host the first two games of the Brazilian women’s team, first against China and then the “classic” showdown with Switzerland. The Maracanã stadium, one of the most famous sporting arenas in the world, will be the stage for the finals and semi-finals of both men’s and women’s tournaments. Spectators from Bahia will be reacquainted with the German team once again (they forged a strong bond in 2014) when they play two games in the Arena Fonte Nova: first against Mexico, the current Olympic Champions, and then against South Korea. Salvador will also host two of the quarterfinals, one in the men’s and one in women’s tournament.

According to estimates by the Brazilian Tourist Board (Embratur), Brazil will receive between 300,000 to half a million foreign visitors during Rio 2016, which in monetary terms means an injection of up to US$1.05bn into the economy, and that is just from overseas guests. This forecast is based on a calculation by the Ministry of Tourism which reported that the average spend by visiting foreigners during the 2014 World Cup was approximately U$2,000.

Figures published by the Empresa Olímpica Municipal suggest that the “Olympic Family” alone – made up of official staff, journalists, referees and members of the Olympic Committee – should account for approximately 37,000 hotel reservations, in addition to the 7,400 rooms allocated to them  in the Olympic Village.

The greatest legacy that the Olympics will create for Rio de Janeiro is the advances in urban infrastructure, with the construction of BRTs (Bus Rapid Transit), the expansion of one of the main subway lines, and the introduction of LRVs (Light Rail Vehicles), as well as other improvements in road traffic conditions, including routing, resurfacing and signposting.

This is before considering the positive impact such a swell of activity could have on the wider population, particularly amongst the younger generations. Various initiatives are likely to be implemented to use sport to benefit wider society, like social programmes in the shanty towns, campaigns to promote more physical activity, games on the beach, weekend schools, to name just a few.

Furthermore, Rio de Janeiro is also the host city for the Paralympics and hence the city has already updated itself in terms of catering for athletes and tourists with specific needs, in accordance with a law that details the necessary provisions in public places, including the correct signage for the visually impaired, and other installations that guarantee full mobility and access. Rio 2016 will come to an end, but her legacy will live on.

For Alexandre Coelho, lecturer of marketing at Mackenzie University in Rio, “the biggest challenge is the successful coordination between the various authorities, sponsors and contracted third parties.” Rio de Janeiro was able to overcome this challenge thanks to a highly complex system of management, which involved the planning and supervision of infrastructure works and the installation of sports equipment, logistics, security, and the establishment of clear communication channels. The result is a boost in both GNP and job creation, albeit for a temporary period during August. For Brazil, the lessons learnt will be as important as any medals won.

The direct and indirect benefits of receiving a foreign Olympic/Paralympic team go far beyond the riches that sport and tourism bring. There is a natural benefit in terms of international relations between the involved entities, and these partnerships can bear many fruits.

One such benefit was the creation of the BEE 2016 Programme, from the Bee Sport Network. Brazilian Anna Pimenta, CEO and executive director of the company, explains that the process is complex and very detailed. “We work with the reception of foreign teams for pre-Games training. For this work to be effective, the training centres must be prepared with integration in mind. We visit the camp, evaluating its features and facilities through the eyes of the Olympic and Paralympic teams, and action any necessary communication or negotiation based on their needs and interests. But the basic recipe is simple: integration. Integration alone is already the big learning experience, “says Anna.

Organising this type of visit involves a contact strategy, preparation, information and organisation. A number of mutually beneficial possibilities arise in relation to the social and economic development between teams and their countries, such as the creative economy and social mobility.

Before the arrival of the teams, it is important that plans for their arrival are fully aligned and prepared. This coordination between parties requires a lot of attention to detail, with considerations ranging from necessary sports equipment to dietary requirements. During the acclimatisation period, the athlete must have the comfort and peace of mind they need to positively influence their performance in competition. “Having an area in the hotel with an outdoor space where they can relax, a kettle in the room, or even sufficient lighting for Paralympians in the corridors are details that could make that hundredth of a second difference between winning a medal or just missing out.

The Paralympic Games are the world’s largest sporting event involving athletes with physical or mental restrictions (mobility, amputations, blindness or cerebral palsy). Although staged for the first time in Rome, 1960, the conception dates back further to Stoke Mandeville in England, where the first competitions of this nature took place as a way of rehabilitating soldiers injured in World War II.

The success of the games lead to a rapid growth in the Paralympic movement and by 1976 there were already 40 countries competing. In that same year the first Winter Olympics was inaugurated, allowing such sports to compete at the top level.

The Games in Barcelona, in 1992, represented a milestone for the event since it was the first time the organising committees of the Olympic and Paralympic Games worked together. Support from the IOC after the Seoul Games, held in 1988, led to the foundation of the International Paralympic Committee (IPC) in 1989 and ever since the two bodies have worked together to develop joint programmes. Finally, in 2001, the IOC and the IPC pledged that the cities chosen to host the Olympic Games would also host the Paralympics in the same year.

Today, there are 27 sports that appear on the Paralympic Games roster: 25 already established, but two, canoeing and the triathlon, will make their debut at Rio 2016, also known as the XV Summer Paralympics, between 7 and 18 September. In addition to traditional sporting codes adapted for Paralympic competition, such as athletics, swimming, basketball, table tennis, alpine skiing and curling, there are some formats that are exclusive to the Paralympics like boules, goalball and 5-a-side football.

The competitions will be played out in four different areas in Rio de Janeiro (Barra da Tijuca, Deodoro, Maracanã and Copacabana). Another new development was the creation, for the first time in history, of pictograms exclusive to the Paralympic Games: the sports are represented in drawings set to the background of the Sugar Loaf Mountain. The official mascots of the Olympic and Paralympic Games, Vinicius and Tom, have also been a huge success, the duo named after another celebrated double act, the composers of the renowned song, The Girl from Ipanema.

In the UK, The Paralympics will be broadcast by Channel 4, providing more than 500 hours of coverage.

The president of the International Association of Athletics Federation (IAAF) is British! Sebastian Coe, who works behind the scenes these days, was once an Olympic athlete and competed in the final of the Men’s 800m at the Olympic Games in Moscow in 1980.

The Olympic cauldron was lit for the first time at the 1928 Games, in Amsterdam. However, the torch relay was only introduced in 1936, in Berlin. Initially, only athletic competitors carried the torch, but today, increasingly, the torch relay is seen as an “informal competition” between means of transport. In the lead up to the 2012 London Games, the torch followed a most unusual path: it rode the London Eye, was carried on horseback, was transported by barge Gloriana along the River Thames, went rafting and even took a ride in a hot air balloon!