Summer and Carnaval in Brazil, the most eagerly-awaited of seasons, offers breath-taking destinations and feverish anticipation of Brazil’s biggest party

Without a shadow of a doubt the most tropical of the seasons, summer, has a particularly special relationship with Brazil and its people.

Happiness, spontaneity and sensuality are the chief characteristics of the local culture, and are awoken by the brilliant sunshine and culminate in a unique party atmosphere, a feeling of freedom and liberty to enjoy the intense blue sky by day and the stars by night.

Brazilians spend the whole year working hard whilst making plans for their summer holidays, which normally coincides with the Christmas break and the school holidays, from early December to early February.

With daily temperatures between 30 and 40oC, coastal destinations are the most in demand. With more than seven thousand kilometres of coastline on offer, Brazil has beaches to suit all tastes: from the more built-up to the more deserted and sedate – some of which are voted the most paradisiacal in the world.

Jericoacoara, in the State of Ceará; Pipa, in Rio Grande do Norte; The archipelago of Fernando de Noronha, in Pernambuco; Gunga Beach and Barra de São Miguel, in Alagoas; Boipeba, in Bahia; Búzios, Angra dos Reis and Ilha Grande, in Rio de Janeiro; Guarda do Embaú and Praia do Rosa, in Santa Catarina; these are just some of the most sought-after destinations.

A combination of crystal blue waters and lush green forest, and the traditional coconut trees that line the shoreline and blend into the soft shades of sand, all create a natural setting ideal for those looking to unwind. 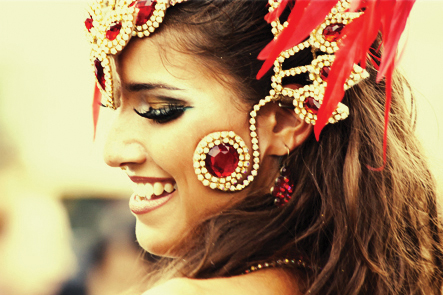 But for those who are less fond of the beach or find themselves in cities far from the coast, there plenty of other great options: for example, Bonito, located in the wetlands of Mato Grosso, is very popular for diving thanks to the transparent waters of its river baths; Manaus, with its beaches along the banks of the Rio Negro; or Conceição do Araguaia, on the border of Pará and Tocantins, are all destinations that attract thousands of tourists every summer.

Beautiful waterfall systems, like those found in the surrounding area of Tabuleiro and Serra da Canastra in Minas Gerais, as well as in the region of Alto Paraíso in Goiás, are also very popular retreats. Lake Paranoá, a large artificial lake built in Brasilia (a city located in the heart of the country – more than a thousand kilometres from the coast!), has dozens of piers, yacht clubs and – as incredible as it might seem – one of the largest water sports complexes in the country .

When talking about summer in Brazil, we can’t forget another important aspect directly related to the season: Carnival. It is Brazil’s largest public celebration, which, each February, mixes historical and cultural traditions and is considered to be the crowning glory of the most exuberant season of the year.

Although celebrated in other countries, it is in Brazil that Carnaval earns its special shine: the abundance of colour, attention to detail, the costumes and props, and the catchy sounds of the drums all guarantee high spirits and a truly unforgettable spectacle.

As well as the professional Samba Schools parades – like which take place in the Rio de Janeiro Sambadrome, the most famous in the world – “other carnivals” line the streets up and down the country. The tradition of using fancy dress, meeting up with friends and joining the blocos de rua (block parties), speaks well to the creativity, high spirits and spontaneity of the Brazilian people.

There are block parties of all types; huge ones that unite thousands of revellers to the calmer, more orderly variety, that are mostly reserved for children and families.

Carnival in the north-eastern cities of Salvador, Recife and Fortaleza is marked by the significant impact of trios elétricos – enormous trucks towing state-of-the-art sound equipment and a stage on which artists sing axé (a popular energetic local music) and keep the crowd partying until sunrise. The historic city of Olinda, near Recife, is known for the famous Bonecos de Olinda (Dolls of Olinda), giant figurines created to pay homage to famous people and folk figures, which are marched along to the beat and rhythm of the party.

In other regions, like São Luiz do Paraitinga, in the interior of São Paulo, the custom is to play classic march music – old carnival songs with fun lyrics and captivating melodies, dating back to the early twentieth century.

In other cities, like Ouro Preto and Diamantina (Minas Gerais), the block parties are dominated by university students, given the significant local student population, which all but guarantees partying to excess and plenty of “high jinks”.

In Florianópolis (Santa Catarina), the most famous local block party involves a light-hearted tradition: men dress as women and compete for the prize of most convincing of performance.

At a time of year when euphoria grips a nation and takes over the country, it might seem that there’s no escaping the revelry, but those who are more party-averse also have options. Pousadas (B&Bs) set amongst the most deserted of beaches and hotels in the remotest countryside offer packages for those who just want to relax and enjoy the family, or simply contemplate silence and serenity.

With so many fabulous destinations and sensational carnivals to enjoy the Brazilian summer, choosing just one might be a tricky task. But one thing is for certain: just like each one gone by, this summer in Brazil promises to be memorable. Why not come and check it out?

Graduated in Publicity and studying for a post graduate diploma in Globalization and Culture, Guilherme was born in Santa Catarina 28 years ago and had lived in Curitiba, Rio de Janeiro and Brasília before moving to São Paulo. He likes traveling the world, experiencing other cultures, photography and, of course, writing.