Luis Bueno is perhaps the biggest name when it comes to this wave of artistic expression. Let’s find out more about the technique Lambe-lambe and the revered artist

BBMag: Where and when were you born?

BBMag: How did your love for art begin and who were your biggest influences?

LB: I always liked to draw. I used to read comics too. As a teenager, I began learning how to draw and paint. From there I became increasingly interested in arts and crafts, in the more traditional sense of painting, sculpture, and so on. I studied the work of the great Renaissance masters and fell in love with the paintings of Monet and Van Gogh; I would come to know their work thanks to the inserts that were included in the gossip magazines of the day. As I knew the owner of the local newsstand, I was able to buy the insert without the actual magazine, which was dreadful. When I started university (Graphic Design at UNESP, in Bauru, São Paulo) I studied the history of art and discovered the work of influential artists, especially Marcel Duchamp and Andy Warhol.

LB: It’s really a language that was born from the culture of posters, which has been a media used extensively since the nineteenth century as a form of urban communication. Even today, there is what we call traditional “lambe-lambe”—design-rich posters plastered around the streets to promote local events. However, the “lambe-lambe” universe has exploded of late. Artists, writers, photographers… Many people have begun using this technique in recent years.

BBMag: What other techniques do you work with?

LB: “Lambe-lambe” is still my principal technique. I usually paint on printed material with an acrylic paint (I normally print in black and white): I end up using one technique on top of another. 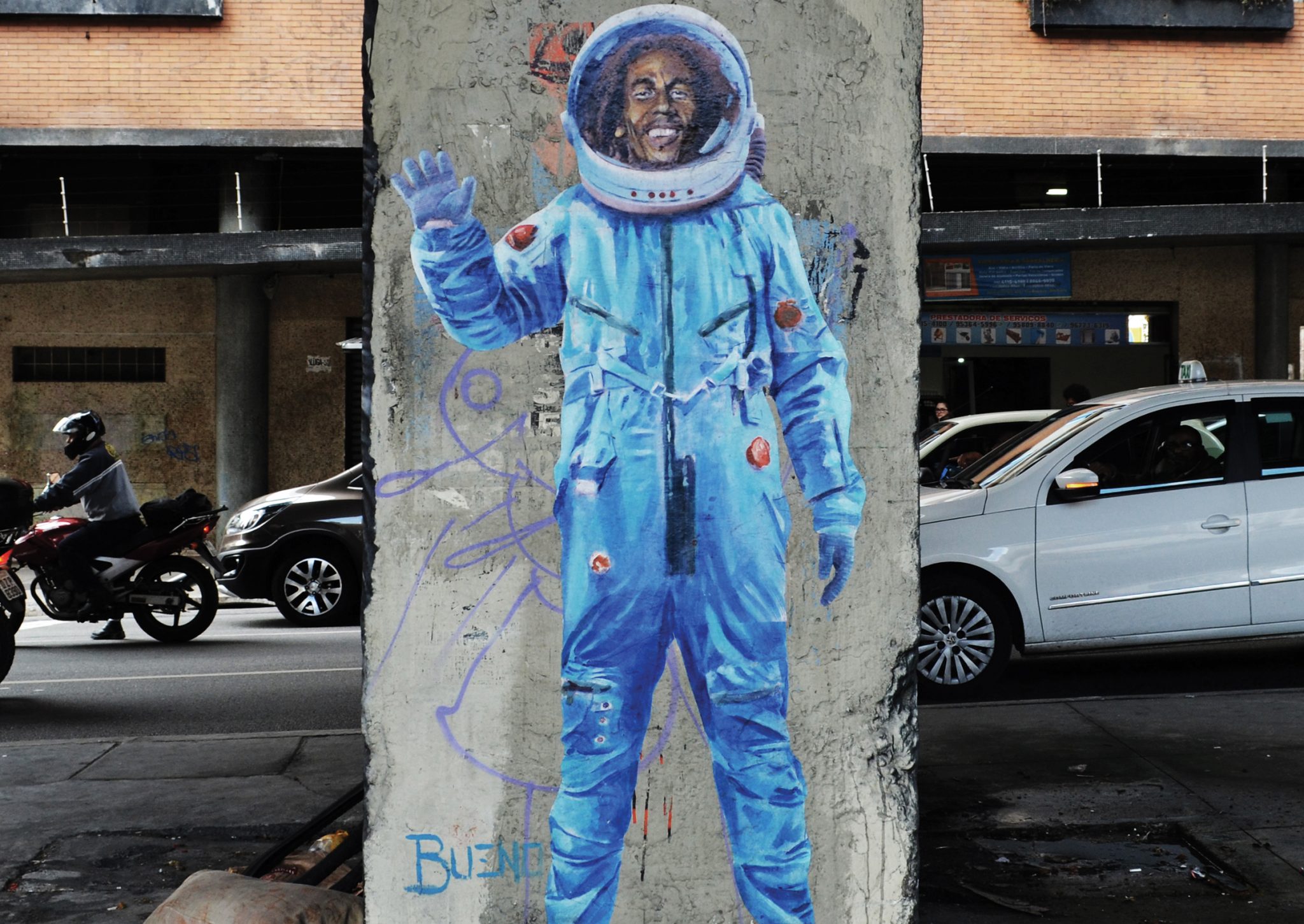 BBMag: Tell us a little about the rise of “lambe-lambe” art and where you came up with Pelé kissing David Bowie.

LB: Before working with “lambe-lambe”, I was working with other techniques, such as stencils and graffiti. “Lambe-lambe” was a means of marrying my work with digital imagery (which came from my design repertoire) with street art. I realised that I was able to mix digital images, painting and street art. Street art is very ephemeral: I created four versions of Pelé kissing Bowie here in São Paulo, but all of them have since been erased or covered up by other things. But there is still a version in Rio de Janeiro, near the “Stairs of Selaron”, in the neighbourhood of Lapa.

BBMag: What’s the next character that Pelé is likely to kiss?

LB: I’m not sure yet. I have a long list in my head, but at the moment I haven’t chosen the next personality.

BBMag: Internationally speaking, where is your work popular? Plans for any international exhibitions?

LB: As I mentioned, urban art is quite ephemeral. Pieces that I have placed in other countries (England and Chile especially, where I have pasted several pieces) are probably no longer there, since they date back to 2015 and 2016. The interesting thing about “lambe-lambe” is that it allows artists to enlist the help of other artists. This year a friend of mine pasted some of my work, more of Pelé and some other pieces, in Barcelona and Paris. In Buenos Aires too, I was able to rely on the help of friends. But I hope I can place some art myself overseas soon.

BBMag: We see you as a role model for many young people interested in art, but many of these people don’t have the financial conditions to pursue their dream. What would you say to them?

LB: There are many ways to study art. For those who live in the large urban centres, I recommend they keep their eye out for free workshops and courses (in São Paulo there are institutions like SESC, which are centres of excellence dedicated to the democratisation of the arts). The internet offers a multitude of other educational options: videos tutorials, channels that specialise in painting, illustration, the history of art etc. At times I think it would be great to be a teenager again, because back in my day access to information was far more limited: I had to read glossy gossip magazines to discover Van Gogh! Other than that, I think it’s important to seek out the work of active and contemporary artists, which is much easier today thanks to online social networks.