Predominantly colonised by Spain (except for Portugal, in the case of Brazil, and a few other European countries), Latin American countries proudly celebrate their respective independence

To understand how the countries of this immense territory known as Latin America came to claim independence, we need to start with a little bit of history.

Most of the various Spanish colonies in the Americas (North, Central and South, which included half of South America, Mexico, Florida, the Caribbean islands and the southwestern United States) declared independence from Spanish rule in the early 19th century.

This process kick started with the spread of new enlightening ideals of democracy—equality before the law, separation of Church and State, individual freedom—in 18th-century Europe. This drive to challenge traditions and reform society encouraged a movement for colonial independence in the late 19th century. This ultimately led to the American and French revolutions, when monarchy was replaced by a republic empowered by the people. As a result, Latin American revolutionaries began to consider whether independence was a realistic and viable alternative to colonial rule.

Independence took place in most Spanish and Portuguese colonies between 1808 and 1826, with the exceptions of Cuba and Puerto Rico.

Born into an aristocratic family in Caracas in 1783, he was mentored by Simón Rodríguez (a Venezuelan educator, philosopher and politician), who introduced Bolívar to the work of the philosopher Jean-Jacques Rousseau—in particular, his ideas on the origins of inequality. Bolívar’s privileged family background also allowed him to travel abroad and study the realities of other countries first-hand.

In 1819, Bolívar proposed the novel concept of a universal Latin American identity, declaring that “our people are nothing like Europeans or Americans; in fact, we are more a mixture of Africa and America than children of Europe”. This new sense of Latin American identity inspired revolutionaries to rally around the idea of political independence, one framed by local needs, considerations, and sensitivities.

In northern South America, Simón Bolívar began his struggle for independence by liberating countries that included all or part of the current nations of Colombia, Ecuador, Panama and Venezuela. Other Latin American countries, with the exceptions of Cuba and Puerto Rico, also embarked on their battles for independence in the early 19th century. Given that territories were liberated by zones, true independence was a slow and gradual process.

Following the liberation of Ecuador (1822) and Panama (1821), and driven by his desire to liberate as much of Latin America as possible, Bolívar travelled further south and liberated Bolivia in 1825. The country, in turn, honoured him with his name. 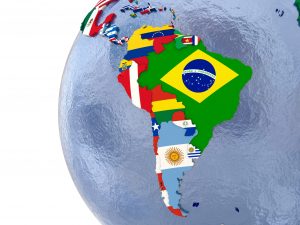 1 Joined the Central American Federation. Only in 1938 did the country become an independent republic.

3 After its independence from Spain in 1821, Guatemala became part of the United States of Central America, from which it separated definitively in 1838.

4 Joined the Republic of United Provinces of Central America, being completely autonomous on 5/11/1838.

5 The first (unofficial) independence known as “la efímera”—because it lasted only two months—was on 1/12/1821 (Spain).