A short set and quick breakers? Or perfect tube formations? Beginners, advanced and even professional surfers can find a vast range of options along the extensive Brazilian coast

Few images better capture the spirit of summer beach culture than surfing. It is a therapeutic sport and one very close to the heart of every Brazilian. No wonder: with so many stunning beaches that marry the picturesque landscapes and beautiful waves, the Brazilian coastline is mecca for surfers of all abilities! 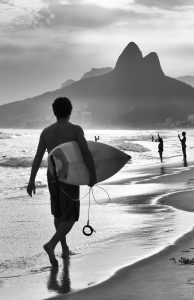 Introduced to Brazil in the late 1930’s in Santos, surfing was soon adopted by the Cariocas and spread all along the coast. The first surfboards – brought over by Americans during World War II – were made of wood, until fiberglass became the norm in the mid-1960s. It wasn’t until the 1970’s, in Rio de Janeiro, that surfing really took off and the first championships were established. In recent decades it has developed leaps and bounds, with the creation of several surf academies and Brazil’s ascendency as a reference for the sport, producing talents like Gabriel Medina, who was crowned world champion at the end of 2014.
Today, Brazil is seen as one of the prime destinations for surfers from all over the world, with a range of options up and down the coast. Some of the most popular surf spots in brazil:

Fernando de Noronha (PE): Like Hawaii, the undisputed cradle of the sport, Noronha is also a volcanic island surrounded by corals that create spectacular waves. With its perfect barrel waves, Cacimba do Padre beach is known as the “Brazilian Pipeline”. Other recommended breaks are Boldró and Conceição.

Itacaré (BA): Located in the south of Bahia, this is a hotspot for experienced surfers. Some of the more renowned beaches for surfing are Boca da Barra, famous for some of the longest waves in the country, and Tiririca, with sets of quick breakers in the typically warm waters of the northeast.

Búzios (RJ): The beautiful Búzios peninsula is a favourite amongst beginners and advanced surfers alike, who get their kicks on beaches like Geribá.

Saquarema (RJ): Dubbed the ‘Brazilian Capital of Surfing’, Itaúna Beach is a bustling surfer’s paradise and the backdrop to several big tournaments. Another notable beach is Vila da Vilatur.

Ubatuba (SP): One of the most visited cities during the summer, Ubatuba is home to the famous Itamambuca beach, the stage for other important surfing championships. Other nearby beaches with good conditions are Maresias and São Sebastião.

Florianópolis (SC): A good choice for year-round surfing, with tides from the south and the east. For beginners, Barra da Lagoa, Armação and Praia dos Ingleses are recommended. More experienced surfers should try Joaquina, Campeche and Praia Mole. The coastal region has several cold undercurrents, so the water is often ice cold. So, when you pack be sure to bring your wetsuit!