The world famous musical, Wicked, arrived in Brazil on 4 March with original staging and all music and scripts translated into Portuguese

The play, which has already been seen by 48 million people across 13 countries, tells the preluding story to the Wizard of Oz. Full of unravelling secrets and a gripping plot the play tells the tale of Elphaba, a smart and misunderstood girl with emerald green skin, who turns into a “bad” witch and cannot understand the popularity of Glinda, a beautiful and ambitious girl who wins the affections of the city. Told from varying points of view, this delicate but at the same time exciting musical, attracts millions of viewers and will no doubt be a success in Brazil. 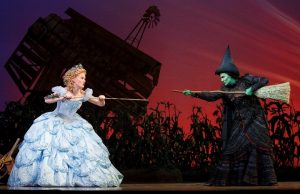 The Brazilian version is the work of a renowned director and, just like the original, is a big stage production. Wicked is the musical of the moment, beating box office records at the Gershwin Theatre 22 times, winning over 100 international awards, including a Grammy and three Tony Awards. Another impressive fact about the London production of Wicked: is has been running for nearly nine years and there have been more than 3,500 shows.

A moving spectacle you can’t afford to miss.

The play is showing at the Teatro Renault.

Seating: The theatre has 27 seats available for people with special seating requirements

Classification: PG. Children under 12 should be accompanied by parents or legal guardian.

Parking: The theatre does not have a carpark