Is there any better way of getting to know a region than through its food and drink? Not that we know of, so let us take you on an irresistible tour of Latin America

In the last edition of BBMag, we took a whistle-stop tour of South American cuisine, highlighting some of the more popular local favourites. This time, however, we are going to expand our horizons from South America to incorporate the whole of Latin America and serve up a more comprehensive gastronomic menu.

The countries of Latin America share a similar heritage and, therefore, many of the key dietary ingredients, such as corn and potatoes, are also common across borders.

As always, in alphabetical order, we start with Argentina—the land of the famous alfajores and chorizo ​​steaks, a very popular cut when it comes to barbecued meats. Argentine cuisine is, quite literally, a mixing pot of influences, as is the general rule in Latin America. First, there was the influx of European customs—Spanish, more specifically—which was blended with indigenous traditions.

In more recent times, the Argentine government is betting on the promotion of local cuisine to help boost investments in the area and consolidate the sector in anticipation of a post-pandemic tourism and leisure. Among the little-known delicacies profiled as part of this project are black truffles, widely regarded as some of the most refined ingredients in fine gastronomy.

Located in the heart of South America, Bolivia is one of the world’s top 20 countries when it comes to biodiversity. For example, Bolivian soil provides fertile ground for some delicious—but little known—fruits like chirimoya, camu camu (originally from the Amazon rainforest) and achachairú.

With over 1,000 different types of Bolivian potato, it is little surprise that the vegetable features prominently in local dishes, such as chuño dumplings. Another long-standing tradition that has been incorporated into modern dishes is cooking with llama or alpaca meat. Both are very nutritious and low in fat. 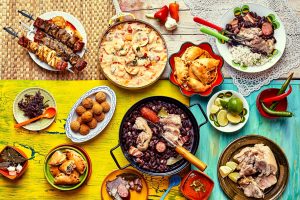 Brazil is famous for its surprising diverse gastronomic preferences. Some of the savoury favourites include feijoada; coxinha; pão de queijo; tacacá; tucupi; pastel; and picanha. For those with a sweet tooth, there’s the brigadeiro; paçoca; doce de leite (almost as popular as the Argentine version); pé-de-moleque; beijinho; suspiro, among others. Many of the dishes in the north, northeast and midwest regions of Brazil are heavily influenced by indigenous heritage and culture. This style of cuisine has been melded over the years with the cooking influences of immigrants, such those introduced by the Japanese, Arabs, Italians, Portuguese, Germans and Spanish. 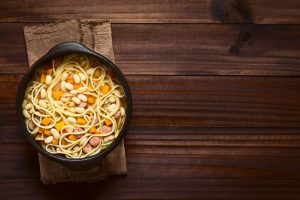 Chilean cuisine represents a mixture of three main influences, at very different times: the oldest being that of the indigenous people, followed by the arrival of the Spanish colonisers, and, in more recent years, the culinary practices of European immigrants, in particular the French. Another important feature of Chile’s gastronomic map is how it varies by region, from the north, south and central areas. In the north, food is prepared with an abundance of llama, potato and pepper, as well as pumpkin, peas and quinoa. Chuño dumplings, also popular in Bolivia, are often served to accompany roasted llama.

In the central part of the country, there are some notable examples of local cuisine, such as leite torrado, humitas, which are made with crushed corn kernels (a popular food across Latin America). Finally, in the south, to the far reaches of Patagonia, fish and seafood take centre stage, supported by the tradition of roasting meats on stones, called curanto.

On the Caribbean coast, fish and root vegetables dominate; in Bogotá, meat and chicken reign, especialluy cuy, the famous guinea pig; in Cauca, the Andean culture prevails, and with it a white custard dessert, made with dulce de leche and rice flour; and the bandeja paisa, a meal that consists of rice, fried banana, avocado, steak and beans, is the ticket in Viejo Caldas.

The Cundiboyacense plateau is famous for its liberal use of wheat, varied grains, fruits, and potatoes to make soups; La Guajira is well-known for its indigenous cuisine, and a taste for corn, yuca and lamb; Tolima is celebrated for its rice dishes and fresh cheese; lastly, the Amazon region is keen on chilli, mostly used as a condiment for grilled meats.

One of the most popular foods in Costa Rica is rice. There is no shortage of dishes that make rice the star: the classic rice with beans; rice with grains; rice with seafood; rice with dried shrimp; and many more. Each region has its own take and local variations.

Other commonly used ingredients include pork, pumpkins and sugar cane. It is not uncommon to find pumpkin pies in bakeries and cafeterias, as well as other delicacies made with pumpkins, be them complete meals or just snacks.

As with so many Latin countries, Cuban cuisine is an interesting mix of Spanish, Caribbean and local influences. Perhaps the most famous dish is chicken with rice, cooked with uruco to give the rice a different colour and a stronger taste.

Ropa vieja comes a close second, a mixture of shredded meat, chickpeas, rice, beans and salad. To wash it down, the Cubans’ favourite tipple is rum. Of note, there are three types of restaurants in the country: state-owned, private (called paladares) and cooperatives, which are state-owned, but run by a private administration. 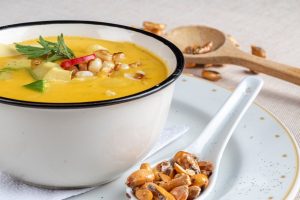 Ecuador is full of traditional dishes. Many of them are cooked in leaves from native trees, such as banana trees. A wide variety of local favourites are made this way, whether savoury or sweet, gourmet or finger food, such as tamal.

In addition to using corn leaves, banana trees and other plants to cook, chilli is also a powerful ally in food preparation, a tradition inherited from the local indigenous populations and used even today in more modern dishes, such as steak with potatoes. Soups and broths are also spiced up with local chillies.

The dominant ingredient in the El Salvador’s pantry is, without a doubt, corn. Marrying the traditional cuisine of the Caribbean people with modern recipes, the country produces some of the healthiest food in all Latin America, thanks to the abundance of plants and herbs available in the region.

Among them, there’s the flor de izote (or yucca), huiscoyol, wild spinach and many others. El Salvador’s coffee is also very popular, both domestically and abroad. 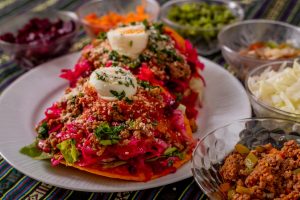 You cannot talk about Guatemalan cuisine without mentioning pepián, considered the country’s most traditional and classic dish, the origins of which date back to the mid-16th century. Over the years, this traditional Mayan meal has been influenced by imported spices and flavours, such as those introduced by Spanish colonisers. Guatemala’s gastronomy, therefore, was influenced by various cultures, such as the Caribbean, the African, the European and the indigenous peoples, and today represents the perfect balance of all of them. The chocolate tamales speak for themselves!

Typical Haitian cuisine uses starchy foods such as corn, rice and beans. Of course, with the French colonisation and the presence of immigrants from several other European countries, this combination turned into something much more complex, with a lot of variety.

The country’s main dish, Poulet Aux Noix, is chicken cooked in tomato sauce with delicious cashew nuts. Stews are common in the region and made with a diverse range of ingredients, including corn, vegetables and beans, crab, and lalo leaves (similar to spinach). Black mushrooms are also widely available and give a stronger flavour to the food.

Honduras is revered for its cocoa—and therefore chocolate—since pre-colonial times. The settlers mainly introduced the cultivation of grains, cereals and different fruits, such as grapes, melons, figs and sugar cane, as well as vegetables such as garlic, radish and onion.

Contemporary cuisine maintains a close relationship with its past, illustrated by the presence of many dishes made with corn. Tortillas are perhaps the best-known examples, but corn is used in other novel ways, such as to make pozol, a drink made with corn flour mixed with water and sugar, also common in Mexico and Costa Rica. 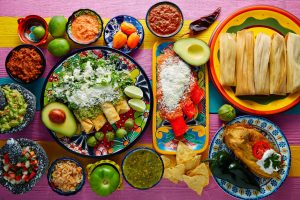 Mexican cuisine is steeped in spirituality. The Aztecs and Mayans in the region, for example, used corn so much that the food acquired an almost divine status. It was then shaped by Catholic customs over the centuries. Corn is used widely, either to make classic tortillas or as an accompaniment to main dishes. The many species of chilli (there are over 50!) are used in practically everything, such as chiles rellenos and most sauces that accompany any dish, or mole, of pre-Hispanic treat prepared with chocolate, chillies and thickened with corn flour. 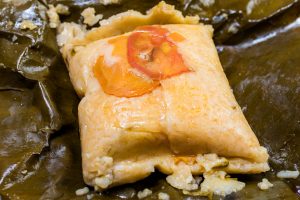 Once again, corn is the protagonist in the history of Central American cooking. The Spanish colonisers were instrumental in shaping traditions and even introduced new cooking methods, such as frying and roasting—until then, the indigenous tribes prepared food over open fires. One of the biggest influences was the introduction of chicken to the aboriginal diet. This was mixed with meat from other wild animals and tomatoes, which have always been a valued delicacy.

Panama is a country with an interesting culinary past, and locals enjoy fish, rice and potatoes as their staples. One well-known delicacy, Tulemasi, comes from the Guna Yala archipelago—a stew with potatoes, fish and coconut milk. 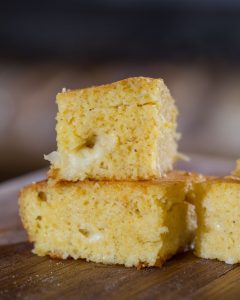 Paraguay is home to two cultures: Spanish, the European colonisers, and Guarani, the indigenous population. This led to a unique mixture of influences that has manifested in local favourites like yerba mate, used in teas and the Paraguayan soup which, despite its name, is a corn cake and not a soup. Interestingly, this unusual blend of European and Guarani culinary has turned Paraguay into a much sought-after gastronomic destination in Latin America. Even their cheese bread, chipa, is unique. And delicious! 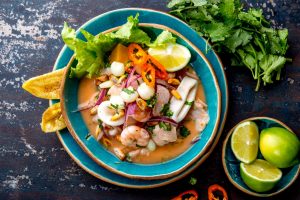 Peruvian cuisine, the heritage of the Andean populations, comprises everything from guinea pigs to corn to cheese. In the capital, Lima, there are plates of all influences, be them traditional or fused with other cultures. The headline act when it comes to quintessential Peruvian dining is carapulcra, a chicken stew with roasted potatoes and bacon. There is also a strong Chinese influence on food. Today, there are many Chinese-Peruvian fusion restaurants, called chifas, across the country. Arroz Chaufa is a rice dish made with soy sauce and nuts and is perhaps the most example of this fusion.

Uruguayan meats are held in high regard around the world. So, little surprise that they are roasted and barbequed as delicious sandwich fillings. Rice is also prevalent. Rice used to make a white wine risotto is loved by tourists and locals alike and is often paired with meat. 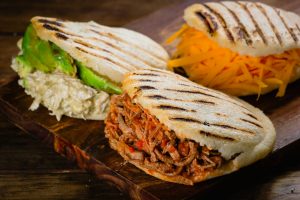 As with virtually all cultures in Latin America, Venezuelan cuisine is a mixture of indigenous, European and African influences. Little wonder, then, that the country’s signature dish, pabellón criollo, includes shredded meat, beans and rice, and is accompanied by fried plantains. Arepas, a cornmeal-based circle-shaped cake, is also a must.