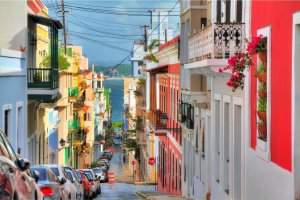 The official name is the Free Associated State of Puerto Rico, a Caribbean island and an unincorporated territory of the United States. Located in an archipelago between the Greater Antilles and a series of smaller islands, the official languages are English and Spanish, with a predominance of the latter.

In San Juan, the capital, the Isla Verde area is famous for its hotels, beach bars and casinos. The Old San Juan neighbourhood is home to Spanish colonial architecture and huge forts like El Morro and La Fortaleza.

Mofongo (fried plantain, mashed and mixed with meat, chicken or fish), tembleque (coconut pudding), bacalaitos (fried cod dumplings), alcapurrias (meat stuffed dumplings) and rice with beans (considered the national dish) are some of the delights found in any eatery in colourful San Juan.