For those that love nature and adventure, the Dolomites are the optimal destination. A UNESCO World Heritage Site, these mountains form one of the most enthralling features of Italy’s Veneto region, with peaks rising above 3,000m.

There are so many superlatives to describe these mesmerising mountains and all of them manage to capture some unique aspect of Italy’s most impressive landscape. Weather in the Dolomites can change quickly, and the range is subject to constant changes brought on by avalanches and natural erosion. Geologists believe that the mountains were formed some 250 million years ago from fossilised algae and coral. 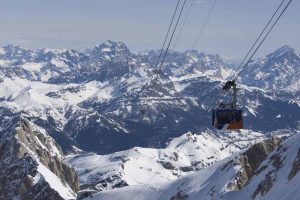 The name, Dolomites, refers to the properties of limestone found in the region, which gives the mountains their white appearance (they’re often referred to as the
“pale mountains”). However, come sunup or sundown the Dolomites take on a totally different hue; in a surprising lightshow, the sun drenches them in pinks and fiery reds.
Whether you’re one for soaking up the scenery or rambling along the many extensive forest trails, walking is generally always part of the agenda. What’s more, the region is perfectly served by excellent roads and comfortable accommodation.

Sports play a big part of life in the city, irrespective of the season. From May to October, trekking, climbing, mountaineering, mountain biking, rafting, golf, tennis, among others, are the most popular pastimes, in addition to the hiking available along the 300km of mountain trails. From November to April, Cortina d’Ampezzo is transformed into one of the ski capitals of the world, with 110km of slopes that traverse the Dolomites.

Rocca Pietore is the gateway to the highest peak of the Dolomites: Marmolada, at a height of 3,343m, caters for climbers of all levels with clear routes, ladders and cables to ensure safety on the mountain. 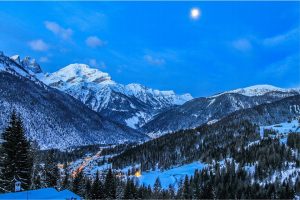 As part of the eastern Alps in northern Italy, the Dolomitic region is made up of several districts accessible via nearby cities like Cortina d’Ampezzo, a city brimming with art, local tradition and fairy-tale scenery. It’s a VIP destination, big on fun and entertainment.

However, if the idea is to simply relax, Valle del Biois has some fabulous options. The towns of Canale d’Agordo, Cencenighe Agordino, Falcade and Vallada Agordina are set amidst bountiful nature and the world-famous summits. The region also features trails at altitude, as well as several cultural day trips, such as a visit to an old “iàl” (charcoal ovens) and to a commune where Pope John Paul I was born.

Bolzano is another nearby city, also known as the “Doorway to the Dolomites” as it’s the only way to reach the foothills of the mountains. It’s an urban centre complete with cultural treasures, museums, exhibitions, theatres, boutique shops, and fine restaurants and hotels. One option from there is to spend some time visiting the famous lakes of the region. Another is a ride on Fun Bob, in San Candida: a summer toboggan run at an altitude of 1,300m, which runs for about 3km with a top speed of 45km/p/hour. An amazing ride.

For those who love architecture and alluring views, Belluno is the ticket. The “Little Venice of the Mountains” is a historic centre which boasts opulent palaces, Venetian architecture, squares and a museum.
When to visit

The Dolomites are an all-year-round de 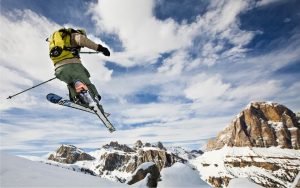 stination. Whatever the season, there’s always things to do and places to explore. Of course, deciding when to go is a matter of personal preference so it’s worth noting the seasonal differences: in spring the snow starts to give way to the native flowers and fauna; in summer the mountains tend to feel brighter and more colourful due to the warmer weather; in winter, despite the cold, the area is transformed into a snow-capped wonderland. This is when the ski resorts run at full capacity.

No matter the time of year, these stunning mountains are also the source of many other attractions, such as mountain biking, thermal baths and motoslitta rides, a kind of motorised sled.