The “Terra da Luz” is a fun-filled destination, blessed with unparalleled natural beauty

Located in Brazil’s Northeast, Ceará is one of the most beautiful states in the country.

Thanks in part to Beach Park in Porto das Dunas, one of the largest water parks in Latin America, Ceará has seen tourism grow throughout the state, welcoming 370,000 foreigners – a year-on-year increase of 29% – and 3.6 million Brazilian tourists, an 18% rise on 2018 figures.

Fortaleza is fast becoming the tourist hub of the Northeast, with Air France- KLM-GOL flights being one of the main drivers for international growth. With a new Air Europa route departing from Madrid (starting in November) and increased investments in trade show activity — this year there are 23 international and 10 national tourism shows that will attract an estimated 450,000 foreign tourists this year alone—Fortaleza has become one Brazil’s hot tickets.

The name itself, Ceará, is derived from Siará, which is taken from the Tupi- Guarani language and means “corner of the jandaia”, a native Brazilian bird and very common in the state. Many refer to Ceará as the Terra da Luz, or the “Land of Light”, on account of the year-round sunny weather. But the truth is that the expression was coined by José do Patrocínio, an important Brazilian abolitionist, with reference to the state’s pioneering action against slavery.

Besides its famous pristine beaches, it’s also considered to be a breeding ground for comedy. Some of Brazil’s best loved comedians were born in Ceará, among them Renato Aragão,

Chico Anísio and Tom Cavalcante. When strolling through the streets of Fortaleza, you’ll often see stand-up shows in public squares, streets and bars.

Ceará’s coast is split between east and west, and crossed by two highways (the Costa do Sol Nascente and the Costa do Sol Poente). Its main beaches are Cumbuco, Lagoinha, Flecheiras, Parque das Dunas, Morro Branco, Águas Belas, Jericoacoara and Canoa Quebrada, the last two of which are the most internationally recognised and visited. Others of note include Praia das Fontes, Icaraí, Prison, Whale, Ponta Grossa, Lagoinha and Barra do Cauipe. 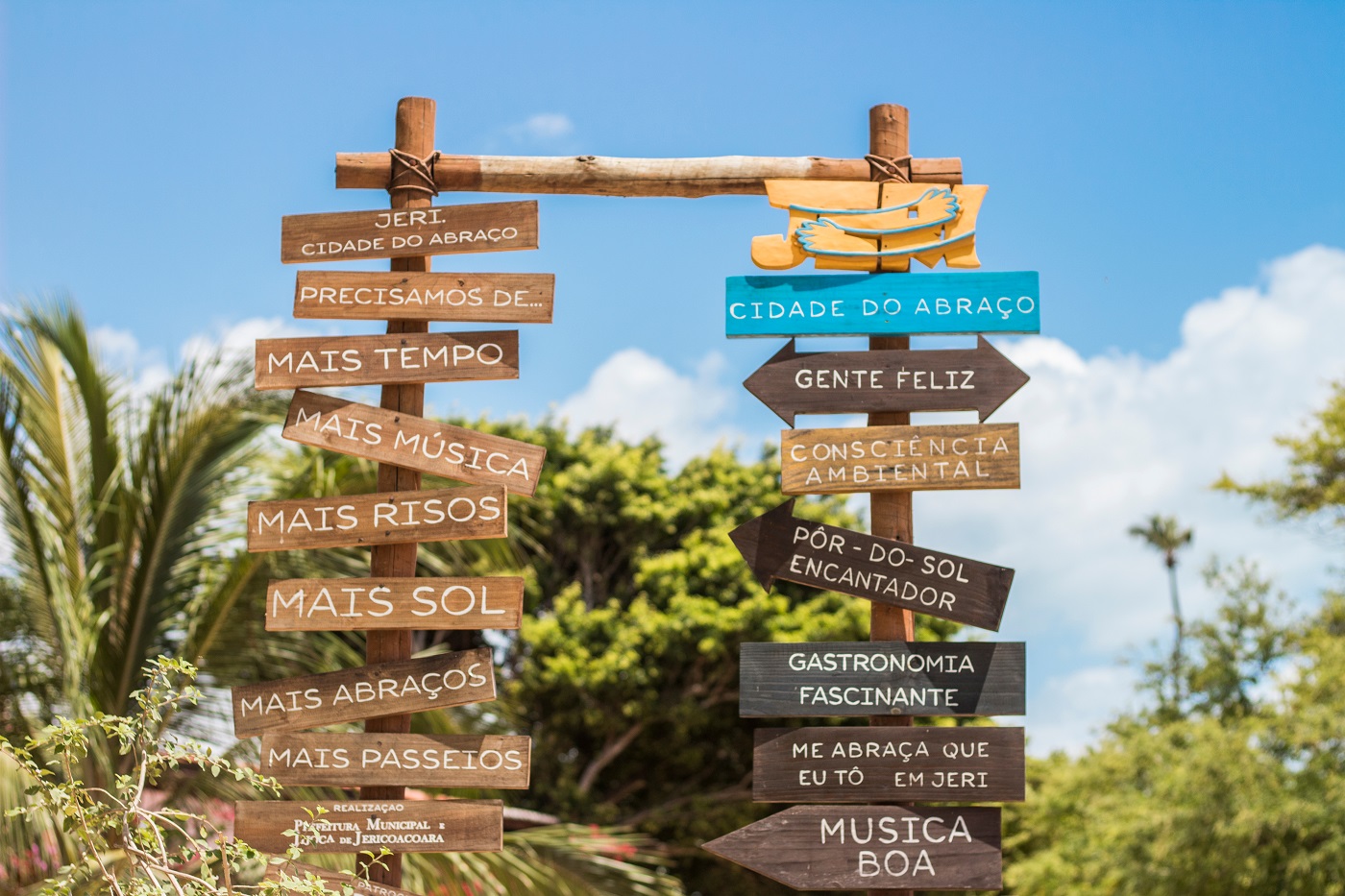 Jericoacoara, one of the most beautiful beaches in the world

Jeri, as it’s known, is 300km from Fortaleza and arriving by car at the municipality of Jijoca you simply follow the coastal road. There are certified drivers who can help tourists along this route, as can be a little confusing. The area is renowned for cinematographic sunsets and many people admire this daily spectacle on a dune known as the Duna do Pôr do Sol. In Pedra Furada, one of the picture postcard backdrops of Jeri, the weathered rocks provide the perfect scenery for holiday snaps. In Lagoa do Paraíso, famous for its warm and crystalline waters, relaxing in this fresh water paradise is magical. There’s also a local beach club that offers tourists every private amenity needed to enjoy the mesmerising crystal-clear waters. Another tip, download the Live Jeri app, where you will find information about absolutely everything: updates about the temperature, the tides, tours and restaurants, etc. It also has a handy online map that shows your current location in relation to nearby attractions. Given the increased interest in Jeri and the wave of positive reviews about hotels, restaurants and other attractions, TripAdvisor Traveller’s Choice listed Jericoacoara as the number one South American travel destination in 2017. Jeri was ranked in third position on the global scale. 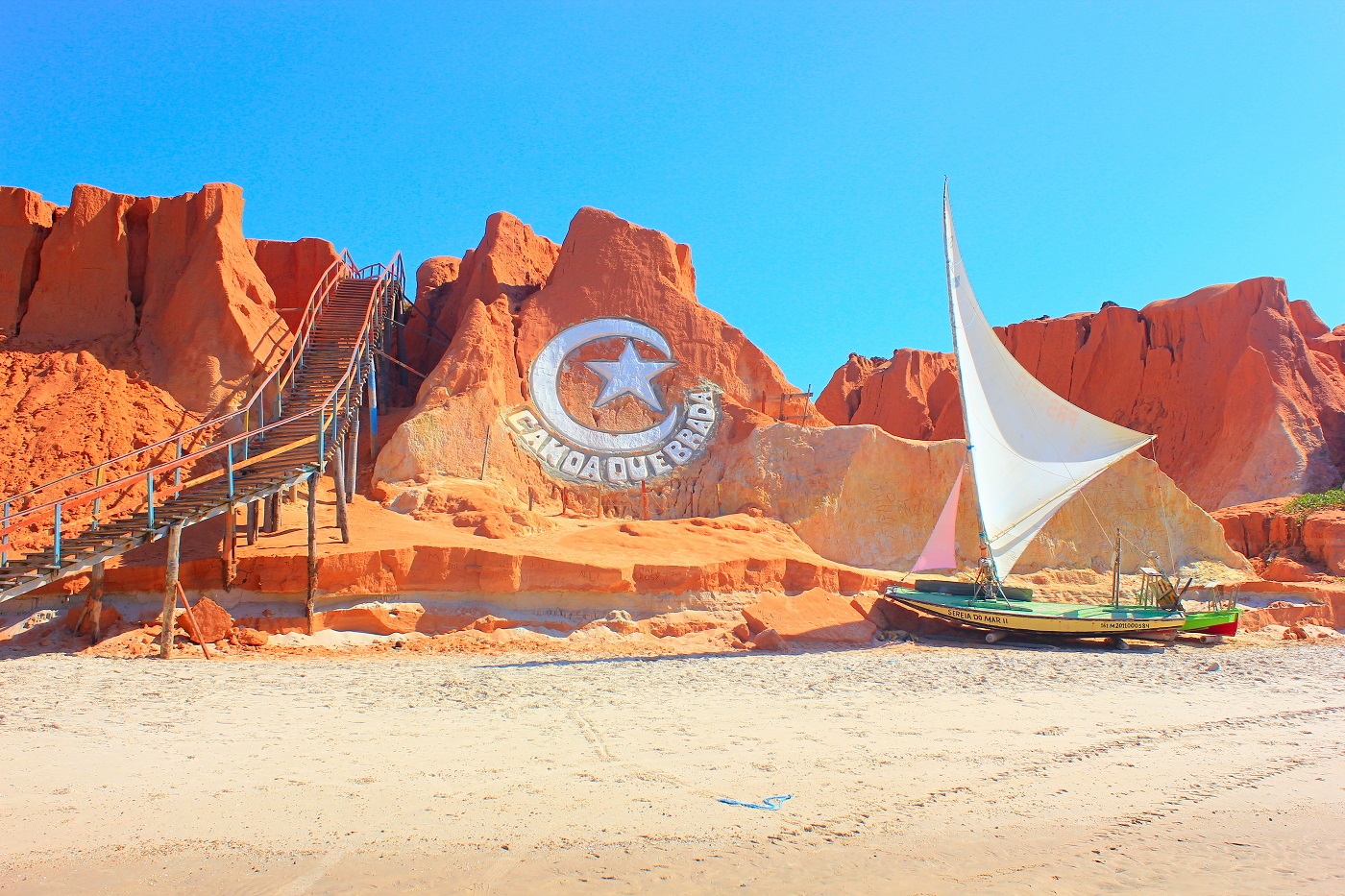 Canoa Quebrada, 170km from Fortaleza, is located in the city of Aracati and, after Jericoacoara, is undoubtedly the most sought-after destination in Ceará thanks to its colourful cliffs and sand dunes. The place has many interesting stories to tell, starting with the origins of its name. Local history suggests that in the 17 ͭ ͪ century Captain Francisco Soares Cunha arrived at the beach with his damaged boat, which he abandoned. The spot became a point of reference among inhabitants, who identified it as “the place of Canoa Quebrada” (broken boat). The beach has a certain bohemian spirit, and there’s a street called Broadway where you can find information about buggy rides, zip lining, kitesurfing, windsurfing, among other attractions.

The gastronomic delights of Ceará are numerous. In fact, the state can lay claim to several national dishes. To mention only a few: carne-de-sol, rapadura, cuscuz nordestino, buchada de bode, panelada, galinha à cabidela, peixada cearense, paçoca and doce de caju. To sample the delicious cuisine of Ceará is a unique experience! The Baião de Dois, for example, is one of the most popular with tourists, and can be served for lunch or dinner: it’s a mixture of beans, rice, grilled cheese, butter and seasoning and is best served with carne-de-sol (dried, salted beef) and a very cold cajuína (caju apple juice). Another must-eat is crab, which comes fresh from the local mangroves. Served with any number of condiments or simply alone, there’s no way to resist a succulent crab leg!

In Ceará there’s no shortage of history. In the south of the state there is a huge plateau, the Chapada do Araripe, which is one of the most important paleontological fossil deposits in the world, notable in particular for how well bones remain preserved. The plateau has numerous water sources that ensure the vegetation remains lush, even in periods of severe drought.

Architecturally speaking, the region was not only heavily influenced by the Portuguese, but also by the Dutch, who invaded and occupied the area on two separate occasions (1637 – 1644 and 1649 – 1654). Several cities still maintain the rustic, bucolic charm of yesteryear, which is a source of much tranquillity and beauty: Aracati and Icó are particularly appealing. But in Fortaleza visitors can also marvel at the grandiose facades of the Military College or Santa Casa de Misericórdia, among other landmarks of colonial expansion.

The art of the region has clear Portuguese, African and indigenous ties. Ceará is especially famous for lace embroidery. The area is also rich in semiprecious stones used to make jewellery, with the centres of Juazeiro do Norte, Quixadá and Quixeramobim being the real treasure troves. Local crafts in general extend to wood, clay, paintings, bottles filled with coloured sands—depicting landscapes and everyday life in Ceará—baskets, and hats made from local straw, bamboo and liana. Leather goods too—such as hats, clothes, and furniture—are also homegrown exports, in addition to one of the most popular forms of cultural expression, the cordéis (short poems printed on leaflets) and the repentistas (Brazilian poets who sing their improvised verse to the sound of a viola or fiddle).

Ceará is also the cradle of forró, in its various forms: from the traditional forró pé-de-serra to the most modern electronic genre of forró, and also the baião, a musical genre immortalized by its greatest composer, Luiz Gonzaga. Along with the repentistas, they frame the musical diversity of the region, a unique medley that’s readily available in the streets, bars or during any number of local festivals.