Born on the northern coast of São Paulo and having visited more than 23 countries and imbibed their culinary cultures, he is now focussing on regional cooking projects in his own backyard.

The talented chef Eudes Assis is considered by critics, journalists and gourmets alike to be the best there is when it comes to seafood. Born and raised on São Paulo state’s northern coast, Eudes’ first inspiration was taken from his mother, Dona Madalena, who also taught him some of his first cooking secrets. With 14 mouths to feed (Eudes had 13 older siblings), she used to dry fish on the washing line and store meat in tins of pork fat. Eudes became accustomed to seeing his mother using caiçara (caiçara = traditional inhabitant of the coastal regions of south/south-eastern Brazil) products: cassava root, yam, banana, local fish, heart of palm and even taro leaf, all of which have left an indelible mark on Eudes’ memory. With a passion for cooking in his heart and soul, along with dreams and determination, Eudes soon had his own little restaurant on the beach and was able to learn as much as possible about the kitchen’s deepest secrets. At the age of a mere 18 years old, and after having completed a bakery course at the SENAI (National Service for Commercial Learning), Eudes got his big chance when, at an event, he made an impression on the then Chef at Fasano, Luciano Boseggia, who then pulled some strings to get Eudes an apprenticeship at his restaurant. With the objective of one day studying in Europe, Eudes saved virtually every centavo he earnt at Fasano, and signed up at the Alliance Française French school. Taking things one step at a time, eventually he had enough to go after his dreams, he packed his bags and set off for France, where he managed to get a place on a Cordon Bleu course of Fish and Bakery. Once he had completed the course, Eudes headed for Lyon, where he worked in 3 different restaurants, including the Michelin starred Bistrot Leon. His passion, determination and dedication saw him chosen, in 2010, as the ‘Revelation Chef’ of the year, by the Brazilian magazine Prazeres da Mesa. Don’t be fooled, behind the seeming simplicity of his caiçara dishes there is a lot of well-founded know-how, which he puts to effect to modernize what he considers to be caiçara cooking’s strength – its creativity. The boy who sold mousse at Camburi beach at the age of 10 turned his dream into reality. Those from his childhood, because he never stop dreaming. BBMag spoke with the Chef about his work. Here’s our chat!

BBMag – Chef, you’re Young, but have a respectable CV and a successful career, which has even taken you to Europe. Tell us a bit about yourself.

Chef Eudes – I’m 38, I studied at the French Cordon Bleu; I did apprenticeships in various European restaurants, and I spent 5 years of my life cooking as a Personal Chef aboard a Yacht! It was an incredible experience, which enabled me to visit 23 countries and, of course, get to know a bit about their individual cooking traditions. I’ve worked with big international names, such as Alain Ducasse, Daniel Boulud and Ferran Adrià. One of my proudest achievements is that a photo of one of my dishes, ‘marmita’, participated in an exhibition at the Dupont Gallery in Paris, a true honour for me.

BBMag – Incredible! So, how can we identify your work, what makes it different?

Chef Eudes – My dishes always highlight regional Brazilian ingredients. I do this because I believe in strengthening the cultural identity of our country’s many and varied regions. I always use fresh regional produce from the place where I am preparing my dishes. Here I only work with fresh fish in partnership with a local supplier, collaborating with the local market to incentivise sustainable fishing and a respect for the environment.

BBMag – And what’s your day to day routine like, do you get your hands dirty and prepare your dishes yourself? Or do you have a team who does most of that stuff?

Chef Eudes – Of course I get my hands dirty! Apart from the time I spend in the kitchen, my day to day routine is pretty hectic, because I also do consulting, give cooking lessons and, whenever possible, I like to give speeches and participate in seminars and cookery fairs. As a Personal Chef, I am also responsible for creating menus for dinners and specific gastronomy events and for that reason I rely on a large and responsible team.

BBMag – We know you are also an active participant in a project that is based in Boiçucanga, a beach on the northern coast of São Paulo state. What’s the project about?

Chef Eudes – It is a very importante Project for the community of Boiçucanga! Project Buscapé has been in action since 2007, helping with the development of the children and young people from schools in neighbourhoods of the South Coast of São Sebastião, offering extra-curricular activities like sports, arts and cooking. The children also take part in championships, races and events. For six years now I’ve been coordinating the project’s Gastronomy workshop, in Boiçucanga, where we have been lucky enough to have the presence of renowned chefs to help give classes and share their gastronomic experience with the children. I also help direct the Project Buscapé Gastronomy Fairs, which take place in the middle of the year, and have become keenly anticipated events, since their inception in 2012, and attract lots of tourists. This event directs all the money raised to keeping the project going the whole year round, and it has already turned into a very eagerly anticipated event by the local population as it attracts many tourists who take the opportunity to try various dishes at very attractive prices.

BBMag – And now that you’ve travelled the world and learnt so much about international cooking, what are you currently focussed on? Do you have anything new in the oven?

Chef Eudes – This year I decided it was time to come back to my roots and got myself involved in a new project: Taioba Gastronomy, in Camburi, set in the hinterland of the beach, close to Boiçucanga. The project attends to a strong regional demand for personalized Caiçara menus for parties and events. In addition, we ill have an industrial kitchen so as to be able to keep up with demand whilst also having a restaurant – we get not only the locals on board but also the tourists. I might have travelled the world, but I’m very happy working here, where I’m from.

So how about trying a bit of Chef Eudes Assis’ cooking? Below are four recipes, making up a full meal, with starter, main course, accompaniment and dessert. Pay attention and bon appetit! 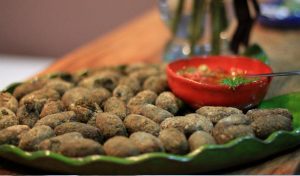 Method
1- Braise the onion in the butter
2- Add the taro leaves and potato
3- Add the flour and mix until it does not stick to the pan
4- Add the salt and pepper
5- Allow to cool down
6- Make the balls, if needed you can use a couple of spoons to help with the shape, dip them in the cassava flour
7- Fry in very hot oil 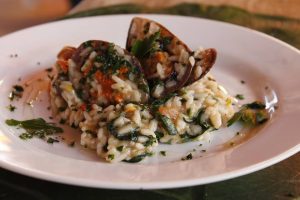 1- Braise the leek and onion in the butter
2- Add the mussels, with the salt and pepper
3- Add the white wine and rice
4- Add the fish stock
5- Cook until rice is al dente
6- Add the tomato
7- Garnish with parsley 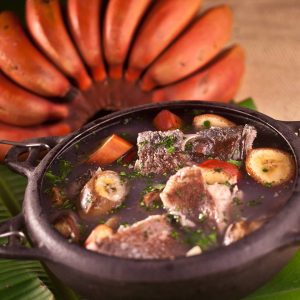 (*)’Wet’ manioc flour is a type of manioc flour that has been produced by leaving a peeled manioc root in water for a period of time, until it ferments.

Method
Fish
1- Season the fillets with salt and lime and leave to marinate
2- In a cast iron pan (essential if to get the blueish look to the fish), heat the oil and braise the onion, garlic and malagueta pepper
3- Place the grouper fillets in the pan and cover them with fish stock
4- Cut the bananas into fours and add them, skin on
5- Boil until the tannins from the banana skins turn the stock blue
6- Remove the banana skins from the pan, leaving the fruit
7- Finish the dish off with the diced tomato, parsley, coriander and salt to taste

1- In a pan, boil the fish stock
2- Turn the heat off and slowly add the flour, stirring well to keep the consistency smooth
3- Garnish with beak chili and parsley branches 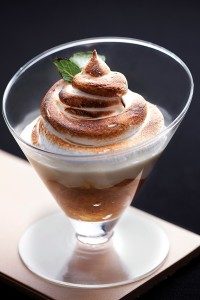 1- Peel the banana and slice. In a pan, put the fruit, sugar & lime juice and reduce on a low heat. Once the mixture starts to darken, switch off the heat and add the cinnamon
2- Heat all the ingredients for the cream, except the vanilla. Mix until you obtain a thick consistency, then add the vanilla.
3- At 120°C, boil the sugar for the merengue in water, until you have a clear syrup. Beat the egg whites and gradually add the hot syrup with the food mixer switched on. Keep beating until the meringue cools, for around 20 minutes.

In a glass, put the banana, then the cream and lastly, the meringue. Leave in the fridge for approximately 3 hours. To obtain the brown aspect seen in the photo, use a blowtorch on the meringue.