They’re a delicious, melt-in-the-mouth, traditional Brazilian snack, as anyone who’s tried one will testify. Brazilians who live abroad and aren’t particularly fond of cooking quickly start missing them, as they aren’t easy to make. In Brazil, they’re known as coxinhas de galinha (coxinha = “ko-sheen-ya”). ‘Chicken thighs’ is a pretty literal translation, but the name is due to their appearance. The best you can get in London are made by Nagyla – so let’s meet the ‘coxinha queen’? 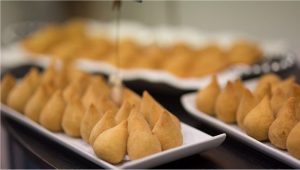 BBMag – Nagyla, tell us a bit about your childhood: where you were born and grew up, if you come from a big family…

Nagyla – First, I don’t consider myself to be the ‘coxinha queen’. I’m not really a fan of that nickname because there are plenty of people out there who make coxinhas as good as mine. When people say I’m the coxinha queen I get shy. I try to do a good job, and keep my clients satisfied. Anyway, here in London there is only one true Queen, and her name is Elizabeth, hehehe!

I was born in Teófilo, in the state of Minas Gerais, by accident! My Mum was on a shopping trip, looking for things she would need for the baby (me), when she went into labour and I ended up being born there. I was brought up in Pavão, in the same state, and my parents still live there. Pavão is a small town of around 8,000 people. I spent a portion of my teenage years in Ipatinga, also in Minas Gerais, which is where my Mother’s family is from. My heart belongs to each of these three cities, for the part they have all played in my life. My childhood was wonderful, we were free to play all the time. I’m afraid I was a bit of a handful, but the things we got up to were all quite innocent. Everyone knows each other in Pavão. My family is well known in the city and its neighbouring towns, as my parents were politicians. I have a medium-sized family, my parents had five children. Today there are only four of us, as one has passed away.

BBMag – So were you interested in cooking when you were a child? Or was it an interest which you developed later?

Nagyla – No, I was never interested in cooking, my Mother is the real cook, she is always receiving compliments for her dishes and she was always the one in charge of the cooking. Wherever she goes she always goes straight to the kitchen. Hehe. As my parents were active in politics, something was always being cooked in the kitchen, for whichever person happened to turn up on that particular day. Cooking is in the blood, but my interest in gastronomy didn’t really peak until I left Brazil in 2002. That was when I found out that I knew how to cook, without ever having learned. Hehe. 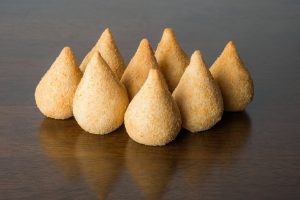 BBMag – What brought you to London?

Nagyla – In 2000 I had a boyfriend who went to Portugal and wanted me to go with him. At first I was reluctant and my Mum didn’t want me to go, but after he had been there for about two years, I went after him. I remember that one day I was in an agency and was going to send some money to Brazil, and there was a man behind me who said he wanted to go to London, I turned around and said: I’m going there! Even though I’d never even heard of London, I said I’d come here, and a month later I was here and couldn’t even say ‘Hi’ or ‘Bye’.

BBMag – But when you got here were you already thinking of making and selling Brazilian snacks? Or did you do other things before you hit on the idea?

Nagyla – No, I didn’t have a clue what I was going to do, I got here in December 2005, with a hotel room booked for three nights, and didn’t know anyone here. I started working as a cleaner and after about a year got a job in an English restaurant in Covent Garden. My love for cooking came naturally, as I mentioned, I think I was born knowing how to cook, hehehe. I still didn’t speak English very well, but I knew what had to be done, as there was a list on the wall, in English and Portuguese, with the name of everything there was in the Kitchen. I used to set off for work at 4am, cleaned two pubs and then got to the restaurant for 11am. Some days of the week I left the restaurant at midnight, and the next day was up at 4 in the morning again. Even with this routine, from Monday-Monday, I was always in a good mood, I’ve never been one to whine or complain about life. Obviously, from time to time, I’d get a little tired and sad, but when these moments came I would make myself focus on my goal, which was to have a family, start my own business, and have my son by my side. It was a long nine years without seeing him (sheds a few tears), but before bringing him here I needed to make sure I had a base, a well-structured life. I met my husband in 2008 and, like any good girl from Minas Gerais, I wanted to show him how good our food is. The way to a man’s heart is through the stomach, and I made him a traditional dish called frango com quiabo (chicken and okra), which is now one of his favourite dishes. We got married, and I spent seven years as a housewife. During this time, I went back to Brazil and brought my son back to live with me. Once I had my family life sorted, I said to my husband: I’m tired of being a housewife, I’m getting bored, I need to do something. In 2012 I did some beauty courses, which were really fun, but didn’t fulfil me entirely. Even though I loved cooking, I still avoided getting involved professionally as the kitchen is a place which can suck you in but, in the end, I couldn’t escape! Hehe. One day one of my husband’s English friends came over and I made coxinhas as a snack, and he said: “Nagyla, why don’t you sell these? They’re really good!” That got me thinking, if he is English and said that, then why not? My husband did a project for the kitchen, as he works in the area. Once everything was ready I started selling to friends and the customer base just started increasing. At first there were quite a few sleepless nights, as I did everything by hand, and even had to do the deliveries. Today we have a machine which helps a lot with the production process. 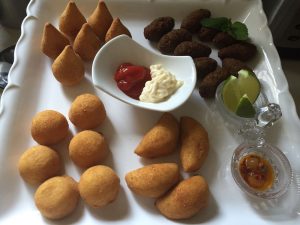 BBMag – Aside from your amazing coxinhas – which we imagine must take up a lot of your time, what with the number of events you are involved in – what else do you do with your time? Any hobbies?

Nagyla – I don’t have a specific hobby. I like everything, anything pleases me. Hehe.

BBMag – We imagine that you must have seen lots of different reactions when the Brits try your coxinhas for the first time. Can you recall any particularly strange ones?

Nagyla – There are all sorts and I even get sent photos of people trying my snacks. One which stands out was an invitation from the owner of the company my husband works for, to celebrate his birthday. As we were just starting out, I asked if I could take some of my snacks. I took 400 coxinhas and there were about 100 people there, all English. After half an hour, there were only about 20 left, on a little tray. A guy came up and picked up a coxinha, tried it, and quickly put the rest on his plate. Hehehe.

BBMag – Lastly, what are your plans for the future?

Nagyla – Extend our space, which is getting a bit cramped, and take our snacks a bit further afield, to places outside of London. We have other plans, but nothing solid just yet. I’m very down to earth, let’s take things one step at a time.

Bossa Brazil Magazine is free to all UK based readers ensuring that all our sponsors and advertisers benefit from 100% awareness to our given distribution audience made up of Brazilian governments and establishments, industry organisations, bars and restaurants, arts centres, schools, cinemas, theatres, shows, festivals, events’ venues and many more...