Urbanisation is the phenomenon that gives rise to cities. Although it seems relatively simple and singular, this phrase infers a myriad of meanings and hidden stories, most of which influence the long process of forming a society, as we know it today.

Although the origins of the world’s largest metropolitan centres date back to the nomadic peoples of ancient history—individuals that came together to establish tribes—one of the fundamental triggers of urbanization was the emergence of industrialisation, the birthplace of which was the UK. With the major world powers established on the back of this industrial drive, gradually, so-called “emerging” countries began to follow suit over the last century, be it on a smaller scale.

But what does all this have to do with Brazil? Everything. To understand what “Urban Brazil” is all about, it’s necessary to understand the social, economic, political and cultural aspects that both influenced the construction of contemporary society and have shaped it since. A simple example of this is the artistic expression of a people, but we will get to this in due course.

There are many layers to our present urban world, and it’s almost impossible to simplify them by applying traditional labels, such as “rich, middle class, poor”. Naturally, there are clear representatives of each of these three categories, but there are so many more categories to consider, and so many people that cannot be pigeonholed in such a simplistic way.

Given the fact that Brazil has been through so many waves of development, it becomes hard to define urbanisation, especially when we consider the relative heterogeneous nature of the country. All you need to do is take a look at some of the luxury hotels in famous tourist cities and draw a direct comparison with rustic settlements of the lesser-known states of Brazil. What unites these two urban archetypes, apart from the country itself, is that they are both producers of culture, economy, and politics, and by virtue of this can be compared and praised in similar ways.

The most densely populated region of Brazil is the Southeast, which, despite only comprising of four states and occupying only 10% of the country’s landmass, accounts for 40% of the national population. It’s here that we find Brazil’s only two global cities, São Paulo and Rio de Janeiro, megacities that have realised rapid urban development and international levels of production and output. There are also the national metropolises, responsible for establishing strong links with the rest of the country, namely Belo Horizonte, Porto Alegre, Curitiba, Fortaleza and Brasília. There are also other regional centres of note, in particular Campinas, Goiânia, Manaus and Florianópolis.

The concentration of commercial zones and large companies in such cities, where essentially “time is money”, led to rise of certain cultural phenomena, such as food trucks that seek to cater for workers that couldn’t afford to “waste” an hour over lunch before returning to their desks for the second half of their day. From the simplest food to the more gourmet spreads, food trucks are an international phenomenon  thanks to their practicality, variety and value for money.

From such ingenuity stem further artistic movements committed to expressing different ways of living within an evolving society that has, gradually, come to represent contemporary existence. To this end, artists seek to build the link between human development and artificial development, which, not by chance, is also a result of human action. The Tropicália musical movement, for example, represented a union of Brazilian artists whose work opposed, albeit indirectly, the 1964 Military Dictatorship.

In more recent times, one of the more dominant forms of urban artistic expression is street art, a style of painting that transforms redundant spaces into true works of art, usually with the application of spray paints. Local governments do in fact contract some practitioners, but many artists simply seek a blank canvas and “15 minutes of fame”. Similar to street art, but lacking in terms of artistic expression, is the tendency for “tagging”, or graffiti. Although illegal, this practice still represents the voice of a sect of society that is demanding something, be it someone to listen to their own plight or recognise the community as a whole. There is, in fact, an interesting documentary called Pixo (2009, João Wainer & Roberto Oliveira), available on Netflix, which shines a light on the mentality of such “artists” in São Paulo. 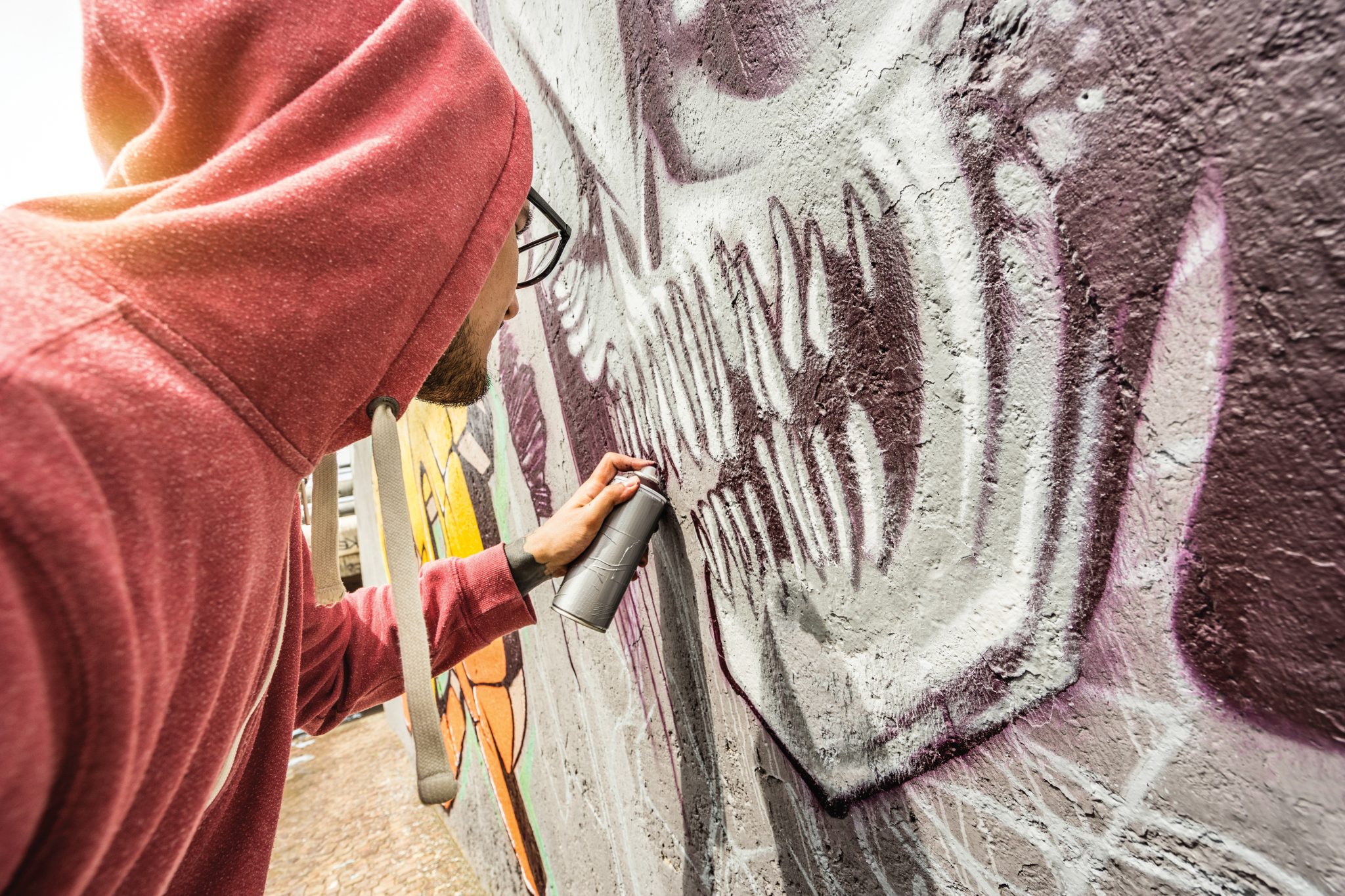 Graffiti and street art can serve several purposes and is of crucial importance when it comes to social projects. The purpose of some NGOs operating in downtown Rio de Janeiro and São Paulo, such as the Quixote Project, is to replicate the model set by Bogotá and Medellín, cities in Colombia that created specific areas for graffiti and street art in neighbourhoods susceptible to high crime rates and violence, and allowed many young people to escape hostile environments in which they were exposed to drug trafficking and danger, and, as an alternative, exercise this activity in a conscious way.

In Rio de Janeiro there is a huge space dedicated to street art: the Mural Etnias. Developed by street artist Eduardo Kobra and his team in 70 days at the Port of Rio, in 2016 the wall was inducted into the Guinness Book of Records on account of it being the largest piece of street art in the world, an accolade that was then claimed by São Paulo shortly afterwards. Incidentally, those interested in this particular form of art simply must visit Batman’s Alley, in Vila Madalena, São Paulo, which has a vast array of street art painted on the sides of the local housing (with permission granted by the owners).

As we move to another continent and head towards the UK, London, has become one of the leading European cities of street art and home to one of the most famous (and most enigmatic) names in the industry: Banksy, a British artist who has established an international portfolio and become a global influence for street artists and designers.

In understanding urbanisation and what it means to wider society, we return to the fact that the UK was one of the precursors to the process of industrialisation. The UK’s accelerated rate of urbanisation, despite creating internal and external conflict, was the fundamental blueprint for other global capitals seeking to modernise and compete in the newly leveraged capitalist market.

Brazil, as an emerging country, had its economy rooted in agricultural products and the export of coffee. Over time, slowly, the country evolved into the diverse economy we see today, one of the most prevalent aspects of which is the tourism industry.

Luxury hotels provide travellers with a differentiated experience, and in Brazil they are found up and down the country. These hotels, from luxury hotels to boutique, usually provide tigh-tech amenities where no detail is spared, or attempt to marry rustic and contemporary styles, which is often the case with hotels in particularly natural settings, such as a beach or desert etc. As their name suggests, this type of accommodation is somewhat more privileged than others, usually with paradisiacal views, 24-hour service, events and all manner of opulent extravagance.

Promoting the best of what a region has to offer, luxury hotels usually target a more affluent public, which includes local and foreign authorities. Often the architecture of the place in question is indicative of the influences not only of the hotel, but also of the region.