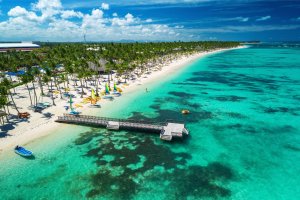 The island of Hispania, the largest in the Caribbean, was where Christopher Columbus first landed in the New World. It is home to rainforest, savanna and mountains, including Pico Duarte, the highest mountain in the Caribbean (3,098m). The Dominican Republic occupies two thirds of this island (which it shares with Haiti) of white sands and crystal-clear waters. Punta Cana is the most popular destination with great options for diving and windsurfing. The capital, Santo Domingo, is made up of 16 cobbled streets and is a UNESCO World Heritage Site on account of its Spanish monuments, such as the Primada de América Cathedral, a Gothic building built over five centuries ago.

Other highlights are the Los Haitises National Park, with predominant mangrove vegetation, pelicans and manatees, as well as rock paintings and engravings, and Bayahibe, a more sedate option, with its coral “gardens” and shipwrecks for lovers of diving and snorkelling.

The typical plate in the Dominican Republic is one made up of rice and beans, with chicken or meat, accompanied by a salad of avocado and tostones (fried plantain).